When I heard the 60th annual Grammy Awards show was going to feature artificial intelligence, I immediately thought “this is a marketing ploy.” But then I found out IBM’s Watson was the AI in question.

Watson, you see, doesn’t have a problem rolling up its non-existent sleeves and doing some good old fashioned hard work. Don’t expect a silly robot rolling around doing a human impersonation on the red carpet, IBM’s machines show up to solve problems and optimize workflows.

And while that isn’t very sexy – hard work seldom is – it’s incredibly important.

The chances are pretty good you’ve encountered Watson without knowing it. It’s embedded in the healthcare system, it makes music, picks the lunch menu, and understands us better than you might think.

It makes sense for IBM to bring Watson to the Grammys. Not only does it have the capability to provide back-end support for staffers, but it’s also perfectly designed to handle the mass amounts of data the event produces.

The content “expires,” to some extent at least, or at least becomes less relevant as time goes on. Speeding the time to market will affect how quickly it can draw fans in.

The content itself – the images, videos, fashion, and even song lyrics – that’s all data, and AI is faster at handling millions of pieces of information than humans are.

What this means is IBM’s AI-powered insights into fashion and lyrics will be made available to fans live, through interactive dashboards, during the event. 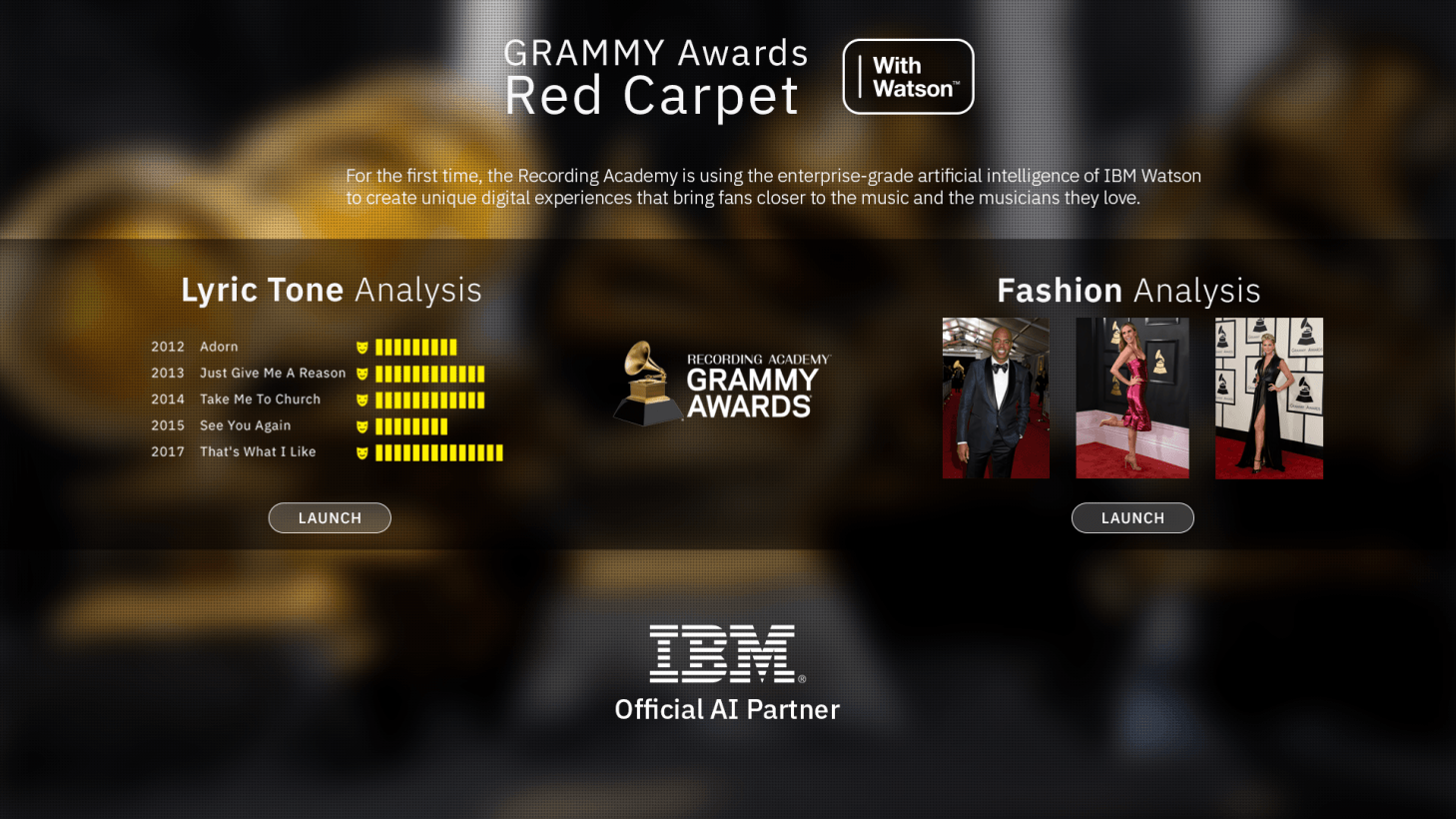 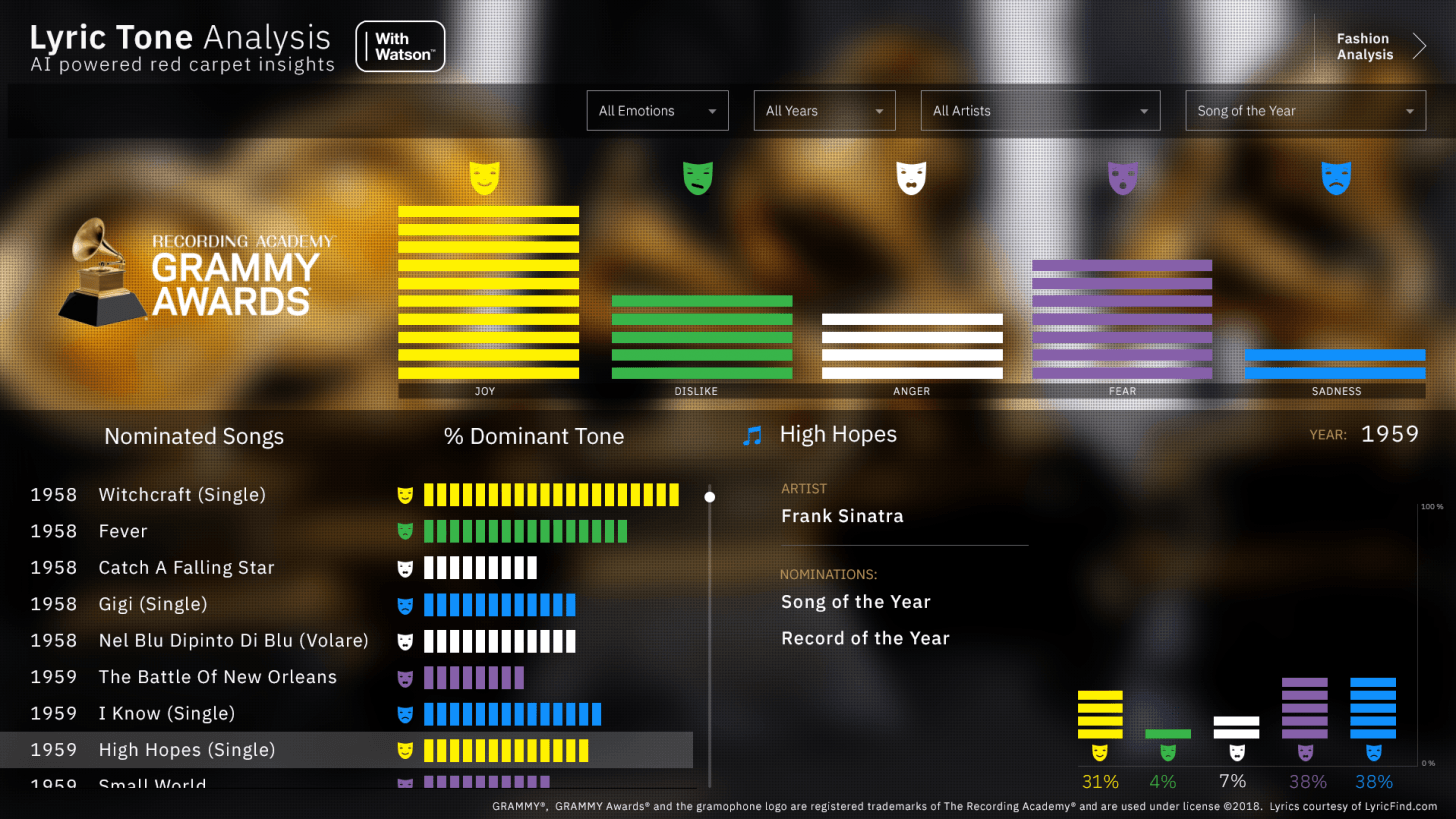 The same insights will also enable the event staff to find and produce content without having to manually sort through hours of video and hundreds of thousands of images.

We’re serving Watson right into the existing photography workflow, for example, which will give staff photographers greater efficiency and the ability to work at larger scale.

Of course, the Grammys aren’t exactly the world’s most challenging AI showcase – even if it is music’s biggest night. We’re not talking about optimizing the New York traffic grid in real-time or simulating collisions at the sub-atomic level. Yet, with the entire world watching, there’s very little doubt Watson will perform with computer-precision. And I’ll even risk a little crystal-ball-reporting: it won’t embarrass the entire industry.

In 2018 there are plenty of “Wizard of Oz” AI constructs which promise to be great and powerful, but usually turn out to be nothing more than puppetry. In order for the public to accept AI, it’s important that it understands AI.

IBM’s Watson is the perfect ambassador for the field of artificial intelligence. It doesn’t exist to give its developers a platform to practice their one-liners, it’s not snarky or weird. It won’t harass you in the grocery store. It just does what it’s supposed to do.

If you’re not impressed by its chatbot functions, take a look at its record in oncology. If you don’t like the fact it doesn’t come in robot form, you might be misunderstanding the purpose.

AI should make the world better for humans.

This isn’t to say Watson is the best, the most powerful, or even the most useful AI there is. Arguably, Google’s DeepMind has more brains. But Watson isn’t just riding the cutting-edge to see where it goes; it’s a boots-on-the-ground AI that already has a bazillion jobs across every industry you can think of.

We need Watson to continue providing the example for other AI (developers) to look up to because, despite its lack of sex appeal, it represents both the present and future of the field.

Watson knows how to shut up and do its job — which is to make all of ours easier.

You can check out Ambassador Watson’s work at the Grammy Awards live, and learn more here.