As reported by AllThingsD, in April 2011, J.P. Morgan hardware analyst Mark Moskowitz estimated Apple’s MacBook air’s revenue potential at $2.2 billion. But just now after a look at the market demand, he’s estimated it at a whopping $3 billion.

According to Moskowitz, sales from the feather weight PC rose 2.9% in the first quarter while Apple shipped out 432,000 MacBook Airs, up 412.9% year over year. And even more astonishing, this news comes while the general PC market is down 10.1%.

As more and more data moves to the cloud, including Apple’s own iCloud music service, computers like the MacBook air make more sense for consumer use making hard drives for massive data storage a thing of the past. Our present is skipping along cumulus and stratus realities, and we no longer need heavy weight MacBook Pros if we’re on the go…and just to put this figure in perspective, the revenue of just one hardware device from Apple is worth the entire (over) valuation of Pandora… 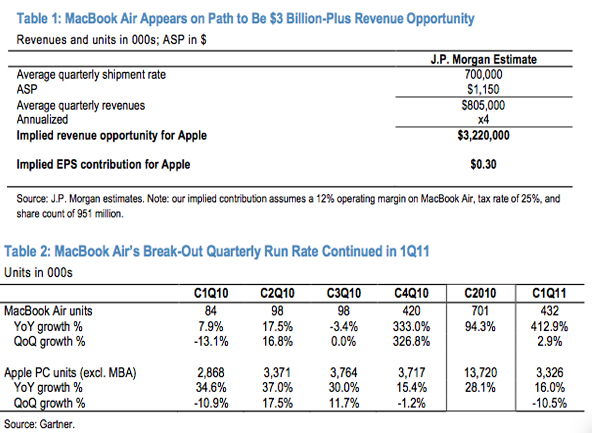