In just its second edition, Hy Berlin has gone from being a local event aimed at the tech community in the German capital to an internationally focused conference combining a F.ounders-style invite-only program with a pitching contest open to the public.

We’ll bring you a more in-depth look at the event (which announced today that European media giant Axel Springer was coming on board as an investor) soon, but for now, here’s how the pitching contest, and its three categories –  Launch, Hardware, and Alpha – went down.

Each of the winners picked up 10,000 Euros and a trip to Silicon Valley from hub:raum, Deutsche Telekom’s inbubator. 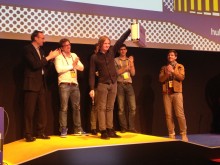 Infogram makes it super-simple to create infographics by choosing a template and then adding the data you want to visualize. The completed graphic can then be embedded in almost any web page. During his pitch, Infogram CEO Uldis Leiterts announced the introduction of additional templates, and the news that it is working with Microsoft to integrate Infogram with the next version of Microsoft Office.

With the Internet of Things being such a hot topic right now, we can expect to see many hardware-focused pitching competitions at traditionally Web-focused events in the future. For now though, Hy Berlin’s was one of the first, and SolarBrush, essentially a Roomba for solar panels was declared the winner.

This robot ‘walks’ and jumps across solar panels to clean them in order to make them more efficient. As the device’s founder put it, “a fleet of robots to fight global warming.” SolarBrush is already seeing strong demand in parts of the world such as South America and the Middle East.

The other hardware contenders were Intoino, a wireless antenna and software combination that makes it easier to develop Internet of Things projects using Arduino boards; Protonet, a personal server box offering up to 16TB of storage, Sorglos Internet, a WiFi router designed to let businesses offer free public WiFi without being legally liable (under German law) for what their users access, and Tado, a Nest-style smart thermostat that is controlled exclusively via a mobile app and adjusts home temperature according to the user’s location, the time the home takes to heat and the local weather.

The Alpha contest featured early-stage startups, and Knowable, a social network for sharing how-to guides for the maker movement, was victorious. Acting like a ‘GitHub for real-world projects,’ users can fork projects, and monetize them by selling blueprints for their products.

The Seedcamp startup, which is aiming for seed round of €250,000 in May, currently has 800 users in its beta. The diverse range of projects on offer on the site range from DIY servers to bananas that look like people.

Knowable was joined in the Alpha contest by Madchen Flohmarkt (a secondhand clothing marketplace with an unusual concierge service), Solid Sound (which makes music played through regular, consumer-grade headphones sound better), Airmarkr (which doesn’t currently seem to have a website but allows you to sketch out a 3D object by drawing in the air with your smartphone and then receive a 3D print of it) and RightClearing, which aims to simplify the music rights licensing process.

Look out for more about Hy Berlin here on The Next Web soon.