This article was published on December 19, 2014

You’re already sharing pictures of your gourmet meals — or maybe just your mid-day sandwich and fries. But now there’s a better, 3D way of capturing and sharing food images, particularly if you have an iPhone 6 running iOS 8.

While not in finished form just yet, Dacuda AG is allowing the public to take a crack at its new 3DAround app, which is specially designed for food photography. Anyone who’s tried to photograph their lunch and share it over social networks knows how hard it is to get the plate to look appetizing — something about how a flat image and off colors just don’t seem to capture that real-time tastebud tingling essence.

3DAround aims to make the whole process easier and more accurate by using Dacuda’s omni-directional SLAM Scan 3D technology (Simultaneous Localization and Mapping) engine, software and algorithms for 3D scanning with the iPhone 6’s camera and iOS 8. The app extracts a full 3D model of an image, capturing object depth and structure as you move around shooting photos from different angles. It then combines the multiple images into a single virtual 3D photo.

How? Based on joint robotics and computer vision research from Dacuda and the University of Zurich’s Robotics and Perception Lab, Dacuda’s  scanning technology stitches accurate images together while allowing for random camera movements — all in real-time. 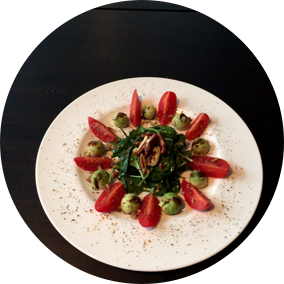 Instead of relying on a group of single pictures, SLAM Scan technology uses the video mode and provides instant feedback. It then superimposes several images and depth maps to produce a “probabilistic dense-point cloud” of your delicious meal.

Apple’s iOS8 camera is a key component of 3DAround functionality, according to the company. The phone’s integrated gyro sensor lets the app capture, in holographic detail, the presentation of all types of food.

If you want to test out the app for yourself, first download the TestFlight app, and from there load 3DAround on your phone.