The Internet is an unforgiving beast. Put a hoax out there, get caught, and you can expect to be ripped to shreds. Internet hoaxes have been around for about as long as the Internet itself.

One of the oldest hoaxes started in 1989, when the story of Craig Shergold started making the rounds. In it, was the story of a young boy in England suffering from cancer, and his dying wish was to get into the Guinness Book of Records by collecting your business cards. It was a cunning and shrewd attempt to collect an entire database of unsuspecting do-gooders contact information.

Since then we’ve seen everything from dogs the size of horses and mummified fairies to a law against drunk Internet-ing, and the hoaxes just keep on coming. Twitter ‘kills off’ about one celebrity a day, while New Yorkers really took the Twitter hoax to a whole new level sharing fake photos as they waited for Hurricane Irene to make an appearance.

We’ve put together a list of 5 of the most recent hoaxes in the past year that have duped us Internet folk into believing an entirely fake story.

Free as a bird

A Dutch engineer, Jarno Smeets, puts out a video claiming that it proves that he was able to fly like a bird. The video is quickly picked up by several publications, marvelling at the sight of a man achieving bird-like flight.

Over on Hacker News and Reddit, where the Internet’s resident sarcastic and cynical crowd tend to hang out, the video didn’t exactly win many people over. One commenter pointed at the inconsistencies in the video itself, as well as an apparent precedent that the engineer has set with his previous videos:

1. He’s received criticism about his videos before, but still insists on filming in random parks, only releasing to press after the event, and using blurry/shaky footage.
2. When he takes off, the camera shakes heavily. When he lands, someone steps in front to block the view.
3. At 0:35, his legs lift up so that his body is parallel to the ground (necessary for flight.) If he had been placing his legs on some sort of device for flight, why would the liftup be that smooth?
This would be awesome if it were real, but… just seems fishy.

Other commenters point to the fact that just before Smeets takes flight, the men with him begin to run pretty fast towards the camera, and away from him, in what appears to be an attempt to avoid whatever might be released during take-off.

As for the physics of it all, which admittedly goes way over my head, one obvious question for anyone, regardless of their ability to understand physics and maths, is how was he able to take off? Smeets’ design might mimic the way a bird flaps its wings, with the help of “two Wii controllers, the accelerometers from a HTC Wildfire S smartphone and Turnigy motors.” But what was it that made him take off? One Hacker News commenter explains his point of view:

“…his wings are very small, and they flap very slowly. The first couple seconds of him after take off our patently absurd; you need to be applying – somehow – hundreds of pounds of force to the air to push you off the ground. Yes, fine, he has a wonderful wing design and some amazing motors and (apparently) zero weight batteries. Fantastic! But none of the components in that video are producing hundreds of pounds of force. (A commenter at Wired estimates that the servo motors are theoretically applying enough force to pick up a two ton load, in fraction of a second. If we had this tech, we could fly, although that wing design probably couldn’t. We could also make Iron Man-style powered armour. Unfortunately, we don’t have this tech.) The whole thing is multiple orders of magnitude off from the realm of “remotely possible”.”

This may not have been proved as an online hoax just yet, but it’s safe to assume that it will soon find itself at the top of the list, hence its appearance on ours.

The Huffington Post, CNN and quite a few other sites and news outlets fell for the 1% tip hoax. If you haven’t already heard the story, yet another image started making the online rounds, claiming to show that a wealthy banker tips waiters 1%.

The over $100 bill showed that this banker supposedly left the waiter with just over $1 to take home, along with another kind of tip: “Get a real job”.

Updating the story, the Huffington Post shared a statement from the restaurant itself describing the bill as “altered and exaggerated.” Altered it was, but exaggerated apparently has far more meanings than we’re aware of.

As it turns out, the real bill amount was $30, the tip was 20% and the note on the bill was a creative addition on the part of an Internet hoaxter, the eponymous ‘Future Ex Banker’, who’s online WordPress residence has since been shut down.

The story has been described as one too hard to resist, for either the media, or netizens firmly focused on the efforts of the 99% this past year, throughout the highs and lows of the Occupy Wall Street movement.

Admit it. Everyone wanted to believe this hoax. Everyone except Internet Explorer users that is. We Chrome and Firefox users certainly have a ‘superior attitude’ when it comes to our browser of choice, and pity those still trapped in in the IE world.

Everyone from the BBC, CNN and Forbes to, yes us published the results of a study that established a direct link between a user’s IQ and their browser. The study showed that IE users had a slightly lower IQ than the rest of us, and we all did a little happy dance, excited that we had finally been proven right, and went along our way.

As it turned out, the joke was on us. The company, AptiQuant, that published the results had registered its domain just one day earlier, while claiming to have been established in 2005.

Another red flag uncovered by the BBC was the fact that staff images on AptiQuant’s site appeared to have been lifted from the official website of French company, Central Test.

A highly offensive picture started making the rounds in June last year, featuring what was purported to be a new McDonald’s policy – charging African American customers an additional $1.50 “as an insurance measure due in part to a recent string of robberies.”

As Gawker pointed out at the time, this wasn’t the first time this image had surfaced, but it certainly led to quite the PR disaster for the fast food chain.

McDonald’s took to Twitter to point out the painfully obvious fact that the photo was fake:

That pic is a senseless & ignorant hoaxMcD’s values ALL our customers.Diversity runs deep in our culture on both sides of the counter.

Despite that, the image, and the fall out, still managed to make it into Twitter’s trending topics, and continued to be shared after McDonald’s attempt to diffuse the situation.

The McDonalds hoax is a perfect example of how easy it is for a joke, or false piece of news, to take on a life of its own. Twitter has certainly made the spreading of these hoaxes all the more easier. In the case of the McDonald’s hoax, had it not been for the microblogging service, it probably would have taken a little bit longer for the story to make the usual email rounds.

We’ve already taken a look at how Twitter makes it far easier to fuel a rumour. Sure email has seen its share of chain letters promising millions of dollars if we just share our bank account details with a desperate and benevolent mystery man, but when there’s a bit of finger pointing to do, Twitter certainly helps the cause along.

Lesbian in Damascus or American in Scotland?

Last year, anyone following the Syrian uprising knew all about Amina, a young lesbian activist writing from Damascus who was eventually arrested by Syrian authorities. How did we know she was arrested? Well a relative of hers posted that news on her blog. 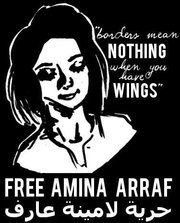 As it turned out, neither Amina nor her relative existed at all. It was all one big hoax. Amina was really Tom MacMaster, an American student living in Scotland who had managed to trick mainstream and online journalists the world over into believing his story.

After her ‘arrest’, activists began to poke holes in ‘Amina’s’ story and Tom finally came clean in a public apology on his blog (which no longer exists). In it he said, “I only hope that people pay as much attention to the people of the Middle East and their struggles in this year of revolutions. The events there are being shaped by the people living them on a daily basis. I have only tried to illuminate them for a western audience.”

If there’s one thing that MacMaster’s attempt “illuminated” it was the fact that mainstream media loves a good soundbite. The story of a gay activist in Damascus was far more headline-friendly than that of hundreds of other activists being detained at the time.

While many online hoaxes are harmless jokes at best, with the aim of nothing more than fooling the press into publishing a fake story, the Amina hoax was a far more risky venture. But not for the person behind it.

On Gay Middle East, Syrian LGBT activist, Sami Hamwi, wrote, “What you have done has harmed many, put us all in danger, and made us worry about our LGBT activism. Add to that, that it might have caused doubts about the authenticity of our blogs, stories, and us. Your apology is not accepted, since I have myself started to investigate Amina’s arrest. I could have put myself in a grave danger inquiring about a fictitious figure.”

Can you think of any other interesting hoaxes from the past year? Let us know in the comments.

Enjoyed this? You can discover more great finds from around the Internet every day at TNW Shareables.