I remember buying my first “adult” laptop when I was about 25 or so. That was nearly 10 years ago and it was a gigantic beast with a 15 inch screen, weighing in at around 11 pounds. Suffice it to say that it wasn’t very mobile, but it got the job done. In the time that has passed, most companies are focusing on thinner, lighter laptops, but HP has decided that the “desktop replacement” didn’t need to go away, and so the Envy 17 is the company’s answer to a tower.

The Envy line ranges from a 14-inch version to this 17-inch beast that I’m typing on right now. By the company’s description, Envy is designed for users who want a “premium laptop” with audio editing and production capabilities. What I can definitely say,  judging by the specs of the machine that HP sent me to review, is that the company is making good use of the large frame of the Envy 17. It’s jam-packed with a 2.2 gHz Intel Core i7 processor, 8 GB of RAM, a 1 GB AMD Radeon card (with HDMI) and 750 GB 7200 RPM hard drive. Suffice it to say that stacking this much hardware will tip the scales pretty handily, and the Envy 17 does, weighing in at nearly 9 pounds.

So let’s talk a bit less about specs and more about why you actually will (or won’t) want to use the Envy 17. To do that, we first need to look at what’s included.

Internals aside, HP has done a pretty great job with the stuff you’ll touch, as well. There’s a 17-inch screen at a resolution of 1920×1080. It spans edge to edge with glass, and only a slight bit of rim visible, flowing over from the cover. The screen is bright, with spectacular off-axis viewing that makes the Envy a great entertainment machine. That is, at least until you cross the 25-30 degree mark. Once you do, it’s game over and colors are instantly washed out. I’d really liked to have seen an IPS display here, considering that it’s HP’s top of the line notebook, but que sera sera. The included display is glossy, so you’ll want to make sure to get it away from light or else face the wrath of glare everywhere. 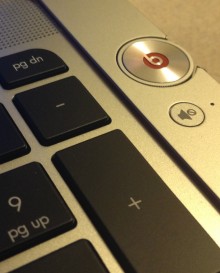 Audio on the Envy is handled by an integrated combination of hardware and software, branded by Beats. Love the brand or hate it, it does a pretty admirable job of producing quality sound on the Envy. My favorite feature, however, is an analog-style volume control knob on the right side of the keyboard, which also acts as a shortcut switch to the Beats control panel.

That control panel features loads of adjustments that you can make for both recording and playback, including a pretty nifty recording feature that can help to block out sound that falls away from a 30-degree arc of the laptop’s built-in camera. In testing, the noise cancellation worked pretty well, and enabled me to do Skype chats and quick recordings while blocking out ambient room noise. It’s not professional-level audio gear, but it’s pretty slick.

The aforementioned webcam gets a snazzy name, too – HP TrueVision HD. In testing, I found it to be very good in almost any normal lighting, though obviously it had trouble in dimly-lit rooms, but that’s to be expected.

The next thing that you’re likely to notice is the keyboard. HP wisely chose to backlight it, calling it the “Radiance Keyboard”. It runs via a proximity sensor which will dim the keyboard when you’re away from it, which is actually quite nice when watching videos in a lean-back mode. They keyboard itself is comfortable, with wide key spacing that makes it feel like you’re typing on your desktop. The 17-inch Envy also includes a full keypad on the right, making it just a bit easier to get rid of your own keyboard.

The speakers on the Envy 17 are above average for a laptop, but they’re still laptop speakers. You’ll find a pair nestled on the front bezel, as well as more along the top of the keyboard. There’s a “subwoofer” built into the bottom of the chassis, so you’ll hear some more defined low end than you do on most laptops, but again, it’s nothing spectacular.

Ports are in abundance, with 2 USBs on the left, 2 more on the right, plus an HDMI output and 2 full-sized DisplayPorts. There’s a card reader, as well as an Ethernet jack along the right, as well, meaning that the device could look quite squid-like if you happen to have all of the ports used.

The final thing that I’ll talk about, for features, is likely what you’ll notice first – the overall look. There were jokes made, on announcement, that the Envy moniker was well-earned because of how closely the laptop resembles a MacBook Pro. I can tell you, undoubtedly, that those jokes had a fair bit of truth to them. Save for a black lid, which is an absolute magnet for fingerprints, you could very easily mistake the two laptops if they were sitting closed, side by side.

I could just say 1 sentence and sum up this entire section, but don’t worry, we’ll go into more detail. In short, it’s fast. It’s really freaking fast. I’ve thrown everything at it from League of Legends to 32-channel audio editing, with effects, and I really can’t seem to bog down the Envy. If you’re looking for something to replace a fairly powerful desktop system, you’re not going to be disappointed in the Envy.

As for the actual numbers? I’ll defer to the folks over at Notebook Review who had a bit more depth to their testing beds than I do. The summary, however, comes down to this: In everything save for the most graphics-intensive of projects, you’re going to get stellar performance from the Envy 17 that is on par with offerings from Alienware, Toshiba’s Qosmio and Dell’s rather fantastic XPS 15z.

Fan noise from the Envy is rather tame, save for during hardcore graphics-driven gaming sessions. When you’re fragging away, expect the sound of a small airplane in your room of choice, at a level that’s easily high enough to be distracting to anyone who’s not playing.

The Good, Bad and Ugly

Wrapping things up, I’d happily use the Envy 17 as a daily machine, if I were a Windows user. There’s nothing about the machine, as far as performance is concerned, that would drive me away from it. Even in laptop use, it stays cool unless the graphics are doing heavy lifting, but a switchable graphics mode can help. HP also includes a “CoolSense” system that adjusts performance to keep the laptop cooler when it’s truly in laptop mode. You can switch this on or off at will, without a restart.

The comfortable keyboard, above-average display and lack of crapware are all up shots to the Envy. The Beats audio is a nice addition, but I’d gladly have given it up to shave a few ounces off of the nearly 9-pound weight. I am, however, a big fan of the analog-style volume knob.

The bad stuff? It’s what you’d expect. The trackpad sucks, but that’s par for the course with almost every computer on the market today. The battery life isn’t spectacular, at around 5 hours of typical browsing use, but again, you’d expect that from a laptop of this power and the included 6-cell battery. The nearly $1,500 price tag on my review unit is enough to make you shop around, but it’s fairly on par with other laptops of this caliber.

The ugly stuff? It’s really only one thing – that lid. HP’s choice to use a matte black top makes for a slick-looking device, combined with the aluminum of the rest, but the way that it gathers fingerprints is really enough to blow your mind. It’s amazing that you can barely touch the thing without leaving a huge smudge, even after a fresh hand-washing.

Ah yes, the ultimate question. And for that, I’ll counter-question you. Do you need a desktop replacement machine? Are you OK with it being overweight, by today’s standards? If you can answer yes to both of these, then HP’s Envy 17 is a standout choice in the segment. There’s just enough “ain’t it cool” factors to the notebook, and the power that it packs is second-to-almost-none.

Ultimately it’s a matter of preference. You’re not going to want to carry this thing around, but with a 17-inch display (and the ability to run 3 external ones, as well), you probably aren’t buying it for portability anyway. If you’re realistic about what you’re buying, and you want a system that can keep you moving fast no matter what you throw at it, HP’s Envy 17 is a no-brainer.