To many onlookers, in particular independent game studios, the events of last month might appear to be a watershed in game development. After all, if anyone can raise $1M on Kickstarter, why wouldn’t a game company use it to fund its next project?

However, the reality is that for most people, the promise of instant success on Kickstarter is at best a distant hope—and in many cases, it’s just unattainable.

Kickstarter is not a Silver Bullet

First, let’s dispel the myth that anyone can launch a wildly successful project and fund a game the size of Double Fine Adventure, or even reach a level that could support most low-budget independent games.

A typical small- to mid-sized game studio consists of 15–30 people. At an average monthly burn rate of $10,000 per person, that puts the personnel expenses between $150,000 and $300,000 per month. Even for a small independent shop, the cost of development can run into six figures once you factor in the cost of writers, production artists, developers and promotion. 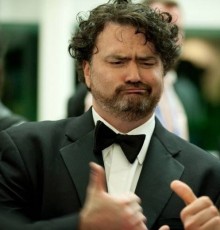 And even if your game costs less than $1M to make, success on Kickstarter is far from guaranteed. Double Fine studios is a clear outlier: the company is run by Tim Schaefer [pictured right], creator of The Secret of Monkey Island and widely credited as one of the pillars of modern game design. According to Leigh Alexander, an editor at Gamasutra and veteran game journalist, “Not only is [Tim] someone that gamers have loved and admired for decades, he’s considered sort of the representative of the lost adventure game genre.”

Schaefer has a gigantic audience and has previously convinced multiple investors to fund his games. With 20 years of credibility, he clearly knows what he’s doing, and he just so happens to be pitching a game whose genre he helped invent. As Alexander described it, “Say Andy Warhol was still alive, and he was like ‘I’m gonna do soup cans again’.”

A small iOS game developer with few hundred Twitter followers and no prior releases will have a much more difficult time convincing potential players to fork over cash. Without a large following, a proven track record, or a novel idea, most game developers will have a difficult time raising the money necessary to fund a serious game’s development.

In addition, as Kickstarter becomes more popular, it will become more difficult to generate necessary interest as the public becomes desensitized to campaigns for the same reason readers on the web have learned to instinctively ignore banner ads. When we’re constantly hitting each other up for money, even exceptional projects worth funding are easily lost in a sea of mediocre EPs, photo expeditions to Peru and attempts to write the Great American Novel of the Twenty-First Century.

Double Fine has its work cut out for it

To the casual observer, $1M looks like a lot of money. In hundred dollar bills, the largest available US currency, it’s about 43″ tall when stacked vertically.

But to a game development company, $1M is pocket change. Larger budget games can go as high as $100M. Even smaller point-and-click adventures can be costly to produce: Double Fine’s own Psychonauts cost $13M, according to Schaefer. When asked to put the figures for Double Fine in perspective, Alexander quipped: “For someone like Tim to do what his team does to the fullest of their ability, a million is not really relevant.”

As the chart below shows, Double Fine’s Kickstarter funding of $2,347,061 at the time of writing is about enough to match the budgets for Costume Quest and Stacking. Both were developed in dire straights during the company’s “Amnesia Fortnights”, a series of two-week prototype assignments where employees were split into teams of four. They were picked by THQ from a handful of smaller games made during this period for distribution deals, and as Schaefer himself said, the games literally saved the company.

Unfortunately, most gamers have little knowledge of how much games cost to produce, and expectations are already running high. And point-and-click adventure fans are, in large part, old-school gamers who are extremely passionate about the genre. Looking at the numbers, it seems likely that we can expect Double Fine Adventure to be closer in ambition to Stacking and Costume Quest, both of which were prototyped in two weeks. How will the people who funded Double Fine Adventure react if the company fails to blow them away?

Luckily, there are plenty of alternatives to Kickstarter for funding your next game. People have been making games since long before crowdfunding became a viable option. How did they do it?

One tried-and-true route is tapping friends and family as angel investors. Think of it as a private Kickstarter, with fewer backers, who (hopefully) love you enough to not publicly shame you if you fail. If you can’t convince your friends and family to fund your first effort, perhaps you should take a hard look at your idea and change it to something more novel, or more accessible—or maybe you should throw it out and try something else.

What about grants? There are millions of dollars every year awarded to cultural and artistic initiatives. The National Endowment for the Arts is still alive and kicking, and as of last year video games are officially recognized as art, though to be considered, developers must either be a non-profit, or be working with one.

For larger companies, public sector research and development can provide an income boost to help offset uncertain sales revenue. And if you’re in Canada, where the government subsidizes game development through programs like the Canada New Media Fund, you’re in luck. Game developers can receive over half a million dollars per year; as it so happens, the record of $536,069 was set by none other than Ron Gilbert, the co-creator of Monkey Island, who is also working with Schaefer on Double Fine Adventure.

For those looking for more than just funding, game incubators are popping up everywhere. Joystick Labs, Yeti Zen, and local organizations like the student-focused Montreal Games Incubator all help fledgling game developers stretch their scaly little wings with a generous safety net and plenty of hot coffee.

While some types of games can only be made with a large up-front investment (for example, Gears of War 3 or Star Wars: Old Republic), don’t discard the idea of bootstrapping your first game and then making money by selling actual copies to players once it’s ready for launch. According to Alexander, the real money for indie shops is in charity bundles and pay-what-you-want promotions. While the games market becomes more saturated with each day, promotions like the Humble Bundle and Free App a Day can drive as many sales as a hit Kickstarter campaign, and in some cases much, much more.

Then there’s the festival circuit. If you submit your game and win an award, the publicity usually translates quickly into massive sales and investors interested in future titles. Edmund McMillen did this with Super Meat Boy: the game received nominations for both the Grand Prize and Excellence in Audio at the 2010 Independent Games Festival, and won the Most Challenging Game award in IGN’s Best of 2010 award (Team pictured below). The awards led to a deal to port SMB to the Xbox 360, and the game has been a massive success, surpassing 1M sales at the beginning of this year. And, in case you were wondering how he managed to raise the money to produce the game, the answer is: he didn’t.

Of course, if you do go this route, don’t quit your day job until you’re living comfortably off of sales. Even T.S. Eliot, possibly the first beneficiary of a crowdfunding offer in history, chose to maintain his job as an accountant, and in fact found that far from killing his creative spirit, the routine actually increased his output as a writer. In letters to his mother, Eliot describes his job at Lloyd’s Bank of London as surprisingly pleasant, and this period was, according to his wife, the most prolific moment of his career in recent memory.

Amazingly, when Ezra Pound, his editor at the time, devised Bel Esprit—a plan to “liberate” the writer from the bonds of corporate slavery by finding thirty guarantors of £10 per year—Eliot chose instead to maintain his work at the bank, citing the long-term security of himself and his sick wife as his primary concern.

When Should You Kickstart?

All this is not to say that one should avoid Kickstarter at all costs; much to the contrary. The service has been a massive success in part because it works for so many people: about 43% of projects reach their funding goal before their deadline is up.

One good reason to Kickstart a project is if it has little or no chance of being funded through traditional channels. Double Fine chose the service for this very reason: the point-and-click genre is a hard sell for investors hungry for blockbuster hits, which these days usually fall under the first-person-shooter or “Ville” genres.

But even for projects that may be funded through other means, Kickstarting can be a fantastic way to raise money if you have what you need to make it happen. Those things include an original, compelling idea, the ability to convince backers that you can pull it off, and a wide reach through social media.

If you do choose to raise funds through Kickstarter, make sure to do your research. Learning from others’ successes and mistakes is crucial to ensure that you don’t end up shy of your funding goal. Craig Mod’s essay Kickstartup details his experience Kickstarting the reprinting of Art Space Tokyo, and this interview with Nick Disabato on Save the Artist discusses lessons learned while Kickstarting the publishing of two books: Cadence & Slang, and Distance. Both have plenty of tips for anyone looking for direction. Finally, make sure to read Kickstarter’s own guidelines thoroughly to make sure you’re eligible to participate before you start filming your promotional video.

As always, the most important question to ask when raising funds for any project on Kickstarter is this: “What am I offering people, and is it worth paying for?” If the answer is anything other than “Hell yes!”, you need to revisit your idea, or start looking for a benefactor.