In just 2 weeks, serial entrepreneur Nihal Mehta flew to Barcelona for Mobile World Congress and then to Cannes, France before flying home to New York City. Just days later, he was out again to Cincinnati for MobileX. At MobileX, he gave a keynote speech at lunchtime to 400 people about how new trends in social media can help targeting capabilities in mobile advertising. He landed in New York City at 2:30 in the morning, and was at a roundtable meeting by 8am. Then just half a week later, he was back on a plane to Austin, TX for SXSW.

“The past 2 weeks have been insane, I’m not usually this crazy,” he says over a phone call. 34-year old, Nihal Mehta is an entrepreneur, investor, professor and philanthropist but he’s best known as the founder and CEO of LocalResponse, a new social advertising platform that’s generated quite a lot of attention in the New York City startup space. He is what many refer to as “the busiest CEO I’ve ever met”.

This is what his calendar looks like on a typical week:

In 2001, Mehta moved to San Francisco right after the dot-com crash to start a mobile marketing agency. He says he “was flying in when everyone was trying to fly out”. He grew his business during the day and paid his bills by DJing and throwing parties at night. Eventually his company, ipsh! raised funds and was later sold to Omnicom in 2005.

Mehta moved to New York City shortly after, where Omnicom is based. Recalling one of his first experiences as an entrepreneur in New York City, he says, “After introducing myself, ‘Hey, I’m an entrepreneur’, people would say, ‘Oh sorry to hear that, let me buy you lunch.’ In SF, it was like, ‘Let me get your autograph!’ The culture has dramatically changed here in New York City. The financial collapse of ’08 has helped. Now, it’s cool to be the entrepreneur. Startups are on the world stage. It’s still not like San Francisco in terms of density but it’s definitely a close second.” 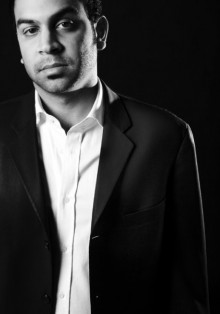 LocalResponse is startup #5 for Mehta. “I have a bunch of scars already all over the place,” he says. “I always talk about startups in 4 laps. The first lap is getting your product to fit the market — basically pivoting your business until you find something that’s unique in the marketplace and received really well by customers. The 2nd lap is getting funding. The 3rd lap is monetizing. The 4th lap is, where does the company go? Do you sell it? Or take another round to grow?”

Mehta says LocalResponse is on Lap 3. He began Lap 1 in 2007 with Buzz’d, a consumer product for users to buzz a location and tell people what’s happening. “We grew it up to a few million users and it was all on mobile web but it was hard to monetize,” he says.

Mehta pivoted his business into a B2B ad tech layer for the social web, measuring intentions like checkins on Foursquare, Facebook status updates, Instagram photos and pins on Pinterest. “When you pin something, you’re broadcasting to the world what you’re interested in. We help marketers respond to that intent.” This was a big revelation for Mehta and his team; in April 2011, they launched LocalResponse to be a leader in the social, intent-targeting advertising space. “It was the best birthday present ever! We had found our pivot! The NY Times broke the story!” he says.

One year later, LocalResponse is now a 20-person team with offices in Chelsea, and Mehta is focused on raising venture capital. In March, he hired Emily Keith, the former National Sales Director of ValueClick, which tipped the gender balance at LocalResponse, making it one of the only NYC startups with more women than men.

“I had a really strong mother growing up,” says Mehta, whose parents were both immigrants who came to the U.S. with nothing and turned it into the American Dream. “I’m still a mama’s boy. All my life, I’ve surrounded myself with very strong women.” Speaking of strong women, Mehta is getting married this year. He says his fiancé, Reshma, is even more ambitious than he is and that “she’s the only women who doesn’t yell at me when I’m on my BlackBerry.” But with the two are not having an easy time planning. “My fiance can plan an amazing fundraiser for the President and I can build and sell startups but we can’t f*cking plan a wedding!” he says, joking.

When he’s not planning his wedding and spending 60-70 hours a week on Local Response, on nights and weekends, he’s an investor and takes time to meet with entrepreneurs. “One of my New Year’s resolutions was to meet a new entrepreneur every day,” he says. “If I cant do that I’ll teach a class to 30 entrepreneurs at NYU and stock up Karma for 30 days. I do that to give back because I feel so fortunate in my life and for my experiences. Also, as an investor it helps with deal-flow. That’s a side-effect of giving advice to entrepreneurs, they often refer you to deals that are really interesting.”

Mehta started investing in 2006; his first deal was AdMob, which was acquired by Google in 2009 for $750 million. After that, he and 3 friends from UPenn started a fund called Eniac Ventures, which has since made 25 investments in mobile tech companies, half of which are in NYC. Mehta says they will have a total of 40 investments by the end of this year.

Mehta, who’s of Indian descent, is an active investor in the India Internet Group. “I managed to hook up with 2 amazing partners to look at early stage Indian and mobile companies that are almost taking a page out of companies that have succeeded in the U.S. There are 930 million cell phones in India but there’s no Amazon of India or YouTube of India — yet– these companies are coming and they’re coming fast.”

Mehta has spoken at Columbia, NYU, General Assembly and in various cities around the world. Last April, he spoke in Qatar on entrepreneurhsip. “In the Islamic world, if you have debt on your balance sheet as an entrepreneur you go to jail. In the US, you file bankruptcy and start over. One of the biggest inhibitors of starting something new in Qatar is their legitimate fear of failure.”

Mehta is also a philanthropist. After 9/11, he and a few friends launched Project Ahimsa, a benefit for victims of hate crimes. They initially raised money to benefit awareness and help Muslim and Hindu families who were targeted for hate crimes. It morphed into a foundation that empowers children with music education as music can help create self confidence and help kids with empowerment. “Hopefully when things slow down in other ventures, I can spend more time on this,” says Mehta. “It keeps me balanced.”

Speaking of balance, we asked Mehta how he really strikes a work life balance, or better said, how he maintains his sanity with so much on his plate.

Since he’s getting married in a matter of months, Mehta says he and his fiancé try to have at least one night a week together without their BlackBerrys. “I joke that I first fell in love with her because she was on her BlackBerry more than I was. We have such a passion for our projects that we don’t necessarily need a break. When you’re passionate about something, all you want to do is dream about it and do it all the time. When I go on vacation 3-4 times a year, I can’t wait to check my email. It’s not because I’m addicted, but because I’m so into it.”

Mehta still has his DJ booth set up in his apartment. “I dont feel like I’m burning out. I feel like investing and operating works both sides of the brain. I’ll also play music and DJ a friend’s party. I’ll go out 3-4 nights a week. You’ll find me at Soho House, a lot. I think I’ve found a pretty good balance, nothing feels like work — it’s a part of my life. There’s no clear black and white anymore.”

Mehta enjoys plane rides as a great way to catch up on work and sleep. “For any flight over 30 minutes, I’m out. On the weekends, I sleep for 12 hours a night but during the week, I’ll catch just 5-6 hours.”

“I’m on the Wedding Diet now, which means no carbs,” he answers, when I ask him about his health regiment. “I don’t eat pasta, breads or any gluten products. I love running. I ran the NYC marathon 2 years ago and was captain of the track team in high school. More than anything, running provides mental relaxation. I live in Chelsea so I run on the west side up and down the Hudson river, and I love doing that on the weekends after 12 hours of sleep. I try to do something at the gym every other day, or three times a week. It’s good for your mind and body to be in sync, relaxed and in shape.”

I ask him if he’s noticed a sense of martyrdom in the startup scene lately — you know, all those founders checking in at the office on Saturday morning and broadcasting out to everyone just how hard they’re working. “You’re going to burn out at some point,” he says. “It’s great to pull all nighters once in a while but you can’t sleep in the office all the time. You shouldn’t set an example for your company that way. It’s important to let them know they can take a vacation whenever they need to. Be as passionate as possible and know that a work-life balance is just as important as working really hard, because in the end, that’s the most important element of sustainability.”

If your life crazier than Nihal’s? Let us know why in the comments, and better yet, tell us your secrets for finding a balance.