If you live and work in Europe, these are all important to keep an eye one while the economic crisis rolls on. Each may have a different impact on the economy more widely and of course each one creates change locally.

So with six different countries generating possible outcomes, how can you track them all and what can make this political coverage more interesting if you’re not usually a follower of politics?

Tweetminster, the platform for following social media coverage along political lines, launched Electionista, a web app for monitoring elections over Twitter across 110 different countries in 58 languages. That means the six taking place this weekend are also in there and you can use the app to filter through activity from and about each place.

Alberto Nardelli is the Co-Founder of Tweetminster which launched the application back in March, he says that it has done a lot of preparation for this weekend. “We worked on our servers to prepare and we’re very happy with our results. We have focused on core networks in each of these countries to avoid replication. It makes it much easier to follow something like an election.
One of the challenges with Twitter is getting through the volume of information.”

The tweets that run through Electionista are categorised geographically and will be cached so that users can scroll back through the links and opinions that people are sharing. 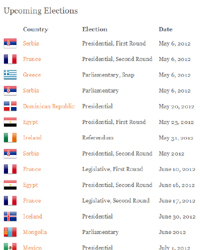 At the moment the service is taking in Tweets in 58 languages and Nardelli says that Electionista is working on translation. The app also provides a forthcoming election calendar so political junkies know when they can get their next fix.

One of the more intriguing things about following global elections over Twitter is the breadth of information available. Images, video and opinion are all arriving online so that viewers can follow information more closely and engage with it in a more personal way.

Nardelli says, “Someone in Greece earlier said that he saw a young person carrying an older woman to the election poll. That image says so much about Greece’s current situation and it brings us much closer to issues and enhances our understanding of those issues.”

So for those who wonder what the polling stations are like in Armenia or want to know what people think about their local candidates in Germany, Electionista might just be the supplement to go with mainstream coverage and official political messages.