Hungarian startup Codie has launched an Indiegogo crowdfunding campaign for its robotic toy, which teaches kids the principles of coding. With more than one third of its funding goal committed in only two days, chances are it will reach its $70,000 target earlier than expected.

The star of Codie’s campaign is its cute wood-covered robot, which kids can guide through a companion coding app. The iOS version is already in beta, with Android to follow soon. The robot also doubles as a regular toy, and can even be used as an alarm clock thanks to its brightness sensors.

While ‘early bird’ perks are already sold out, backers can still pre-order one of the toys for $169 plus shipping fees. In addition, the campaign also features rewards targeted at specific segments, such as donors, hackers and schools.

As you may remember, Codie had been one of our favorite startups a few weeks ago at Mobile World Congress in Barcelona. What first caught our attention during the event was one of the first assembled units of its robot, which is set to ship in November 2015. 25 backers will even get their unit as early as in June in exchange for a slightly higher pledge of $249.

Two years in the making

The reason why Codie can ship relatively fast is that its team already did a lot of background work, including several prototyping and testing cycles since its inception in 2013.

As a matter of fact, Codie’s co-founders Adam Lipecz and Andras Hollo met at Startup Weekend Budapest, and won the 2013 edition of the competition with their project Robophone, renamed as Codie in October 2014 to reflect its growing ambitions.

Codie now has a team of seven members with complementary backgrounds, from engineering and design to marketing and app development. According to Peter Erdei, who is in charge of visual and UX design, Lipecz’s inspiration came from his own experience:

“Adam was teaching programming to university freshmen at the university. When he got the curriculum from his professors, he immediately realized that learning how to code is just not engaging if it is being taught that way. He has got a great passion for robotics since his childhood, he enjoyed that his programs are interacting with the real world.”

With that in mind, Lipecz and his team started to work on Codie as a way to lower the barrier of entry into programming and robotics. “With Codie, kids jump into an authentic experience that’s educational and engaging, Lipecz said. Here’s how it looks:

Interestingly, Codie decided to develop its own programming language, which is touch-based and doesn’t require a keyboard. While it is inspired by other kid-oriented languages, such as Blockly and Scratch, it also brings some improvements, Erdei said:

“Commands organized into blocks is an example for that; Blockly uses action blocks as well, but we felt that their interface is complicated, we wanted to soften down the sharp edges of that language and make more fluid to use.”

In practice, Codie progressively teaches several concepts, from task execution sequences to variables, programming loops and conditionals. All of this is done through the app, which is connected to the robot via Bluetooth. Thanks to the toy’s accelerometer, gyroscope and sensors, the kids can get instantaneous feedback by watching its moves.

Codie didn’t create its programming language in isolation; it also made sure that schoolchildren would test it and share useful feedback during the development process. Its core target are 8-to-12-year-olds, although it is meant to be fun even for younger kids (and for their parents).

By making coding both tangible and entertaining, Codie hopes to encourage more kids of all ages to learn how to program — including girls. The team took this consideration into account during the development itself, Erdei explained:

“We definitely want to see more girls getting into coding in the future. We designed the robot to be appealing for girls as well by avoiding the use of features which are said to be more ‘boyish’, like wheels and sharp edges and using a more friendly-looking material: wood. We’re encouraging kids to play with Codie in every setting as it integrates well into any game, thus making coding an ordinary part of the everyday playing.”

One of Codie’s partners is Hungarian NGO Skool, whose aim is to encourage girls to code. This led Codie to help a group of Hungarian girls prepare for the local FIRST Lego League‘s programming cup, where they won of the competition’s awards.

From Budapest to the world

Codie is based in Budapest, where it is an noteworthy member of the city’s tech scene. In 2014, it won the national edition of Microsoft’s Imagine Cup, and its co-founders also took part in Startup Sauna‘s acceleration program.

In addition, the team has raised $10,000 from an angel investor and $125,000 in seed funding from Hungarian accelerator and business development company iCatapult. 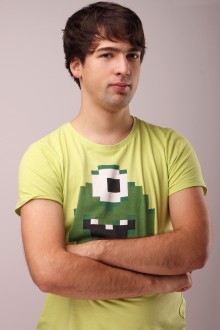 According to Lipecz, “Budapest is a really exciting city in many terms, and the startup ecosystem is developing as well. There are a few already hugely successful startups based here (Prezi, LogMeIn, Ustream) and there are many innovative projects going on; a few recent notable examples are Brewie, Synetiq or Tago Arc, and there are a constant stream of fresh projects, too.”

The city’s low cost of living means that startups can maintain a low burn rate, which helps attract and retain early-stage companies. “Many creative minds are here in the city and we’d be really happy if Codie could contribute to making Budapest a big startup hub of Europe,” he concluded.