This article was published on February 4, 2015

Huawei-owned mobile brand Honor has today launched its third smartphone, called ‘Holly’, following on from the Honor 6 and 3C. 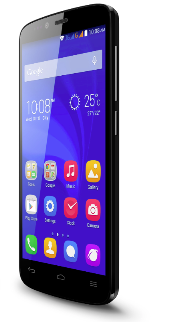 The Honor Holly offers a 5-inch 720p display, 16GB of storage and a quad-core 1.3Ghz processor paired with 1GB RAM to keep things ticking over nicely. It also comes with dual SIM slots as standard. Software-wise, it will run Android 4.4 out of the box.

On the rear of the device is an 8-megapixel F2.0 aperture camera sensor, and on the front is a 2-megapixel affair. The company says that there are also five sets of optical lenses, improved light capture and a macro mode.

It may be new to the UK, but the Honor Holly has already been available in China and other markets since the end of 2014.

While Honor has a rough price in mind – £109.99 (around $167) – it says that will drop for customers who register their interest between February 6 and February 23.

The price will be announced on February 23 and will then be offered for sale at that price until February 26. After this, it will go back up to the £110 retail price. People who do register their interest are under no obligation to actually buy one once they become available though.

Check back for our quick hands-on with the device later.