OK, so I’m a sucker for cool toys. So when the folks over at XenonProject.com offered to send me a radio-controlled helicopter with a built-in digital video recorder, I knew it was going to be game over for my productivity. I got my hands on the Hawkspy LT-712 radio controlled helicopter and finally got around to snagging some AA batteries for the controller. Here’s what I found:

First thing’s first – it says in the instructions that you shouldn’t operate the Hawkspy unless the wind is perfectly still. Well, they mean it. It was a bit rainy today, but with only the slightest breeze. Unfortunately that breeze was enough to keep me flying in any direction other than where it was headed. I thought that there might be a problem with the helicopter, but a quick indoors flight (I don’t recommend this) proved to me that it was just the wind.

Now back to the beginning – Unboxing the Hawkspy you’ll see that it comes ready to fly, and only needs a battery charge. That happens via a wall charger and built-in cable on the helicopter itself. Charging takes about 15-20 minutes, and will give you around 10 minutes of constant flight time. The controller takes six (yes, freaking SIX) AA batteries, and I’m not sure how long they’ll last. The controller itself is pretty simple, with only throttle and steering controls, but it is lit up with loads of LEDs which will quicken battery drain. 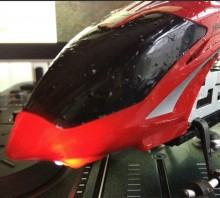 The helicopter itself is a bit blinged out too. You have a front “landing light”, a rear set of red and blue LEDs that flash in sequence, and then the signal LEDs for the camera module. Now, about that camera…

You need to know that you’re not dealing with some massive-quality HD camera here. What you have, instead, is something that’s highly capable and serves the purpose that you’d expect out of a $70 radio-controlled toy. The results are passable, and the included 1 GB micro-SD card will give you more recording time than you have flight time by far, with 1 minute of recording equalling about 65 MB of data.

Now here’s the other secret – I suck at flying RC helicopters so you’ll have to excuse the stability in the video, but it will give you a good idea of the quality. Mind you, it’s raining and crappy here, and I’m sure that the camera would do a better job on a clear, sunny day. Oh, and no, there’s no sound. All you’d hear is the whirring of the rotor blades anyway.

On the up shot, I’m better at flying this one than I have been at most because it really is a very simple machine to get the hang of. It’s also pretty durable. I’ve banged it into the house, landed it on its side from about 20 feet in the air, ran it smack into the deck and a few other choice…um…experiments. The Hawkspy is none the worse for wear.

In all, for the $70 price tag, I’d highly recommend the Hawkspy LT-712. At 12.5 inches long, you’re not going to want to fly it around the house, but it’s a great toy for those calm, sunny, outdoor days. Oh, and the folks over at XenonProject.com have loads of radio controlled helicopters from which you can choose, so don’t think you’re stuck with any small selection.