Remember pico projectors? A few years ago, the idea of being able to carry a tiny projector anywhere with you was one of the most popular visions for the future of tech. Even your phone would have one baked in so you could easily give presentations or watch a movie with your friends anywhere.

Unfortunately, things haven’t quite turned out that way. There are several pico projectors on the market, but they’re more niche products than everyday commodities, and I don’t we’ll see a projector in an iPhone anytime soon.

The Touchjet Pond is taking the opposite approach by stuffing an Android device’s functionality into a projector, including the touchscreen. Started as an Indiegogo campaign last summer (it was originally called the TouchPico), the device is launching today for $599, and we’ve been able to get some hands-on time recently. 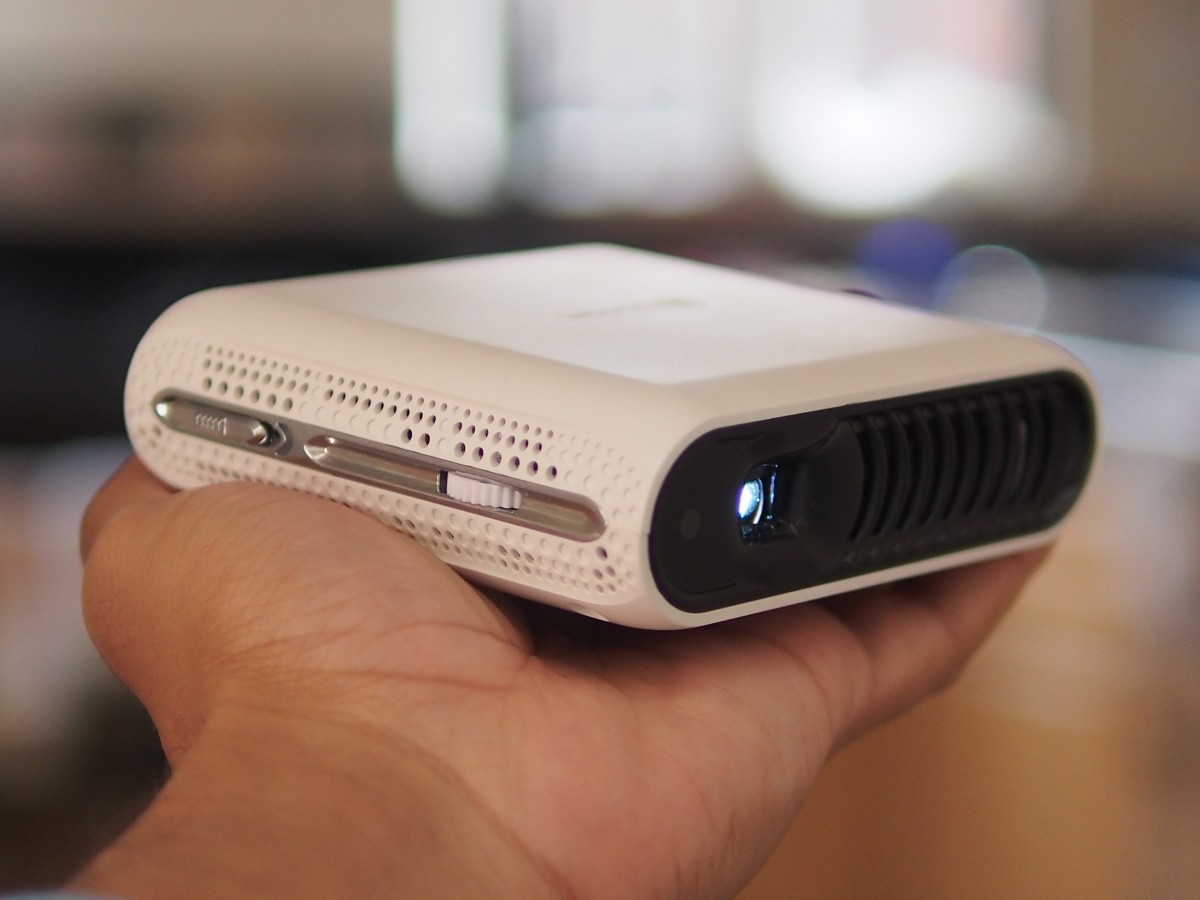 Touchjet says the Pond is the first consumer device to allow you to create a touchscreen out of any surface. It can project a screen size of up to 80 inches at a resolution of 854×480 Though you can go larger, if you don’t mind the dimness from the 80 lumen output.

The device is all plastic, which keeps the weight down to 9.6 ounces, and it comes in a nice carrying case. Connectivity-wise, there are Mini HDMI and micro USB ports on board, as well as a headphone jack should you not want to use the tinny internal speaker.

The device comes with a mid-range dual-core processor, 2GB of RAM, and 18GB of user-accessible storage. Those aren’t exactly high-end specs, but performance was generally smooth, and there weren’t any dropped frames when watching video. That said, on two occasions, the device froze completely, forcing me to power it off. It’s also shame the storage isn’t expandable.

There’s also a 4,000 mAh battery that can power the projector for two hours in a slightly dimmer ‘eco’ mode.

Overall, I’ve found the sweet-spot for the display to be around 50-60 inches, though your experience may vary, depending on your preferences and lighting conditions. Colors are surprisingly good, with even illumination. I do wish the display were at least HD, s most comparably-sized projectors come in at around 1280×800. But then most projectors don’t come with Android preloaded.

You’ll need to use one of the two included styli to actually interact with the display. These work by shining an infrared light the projector can then track. They’re also pressure sensitive, which comes in handy for text and drawing, and unlike the projector’s housing, they are made from metal and feel very sturdy.

In a thoughtful design point, if you don’t want to tap on the surface you’re projecting onto – say if it’s a rough texture, like stucco – you can just press a button on the stylus to turn on the infrared light, and the projector will register it as a touch.

Alternatively, the Pond’s included remote – called the Airmouse – doubles as a pointing device. You can navigate around Android with the directional pad, or you can switch on a mouse mode that tracks your movements in the air. 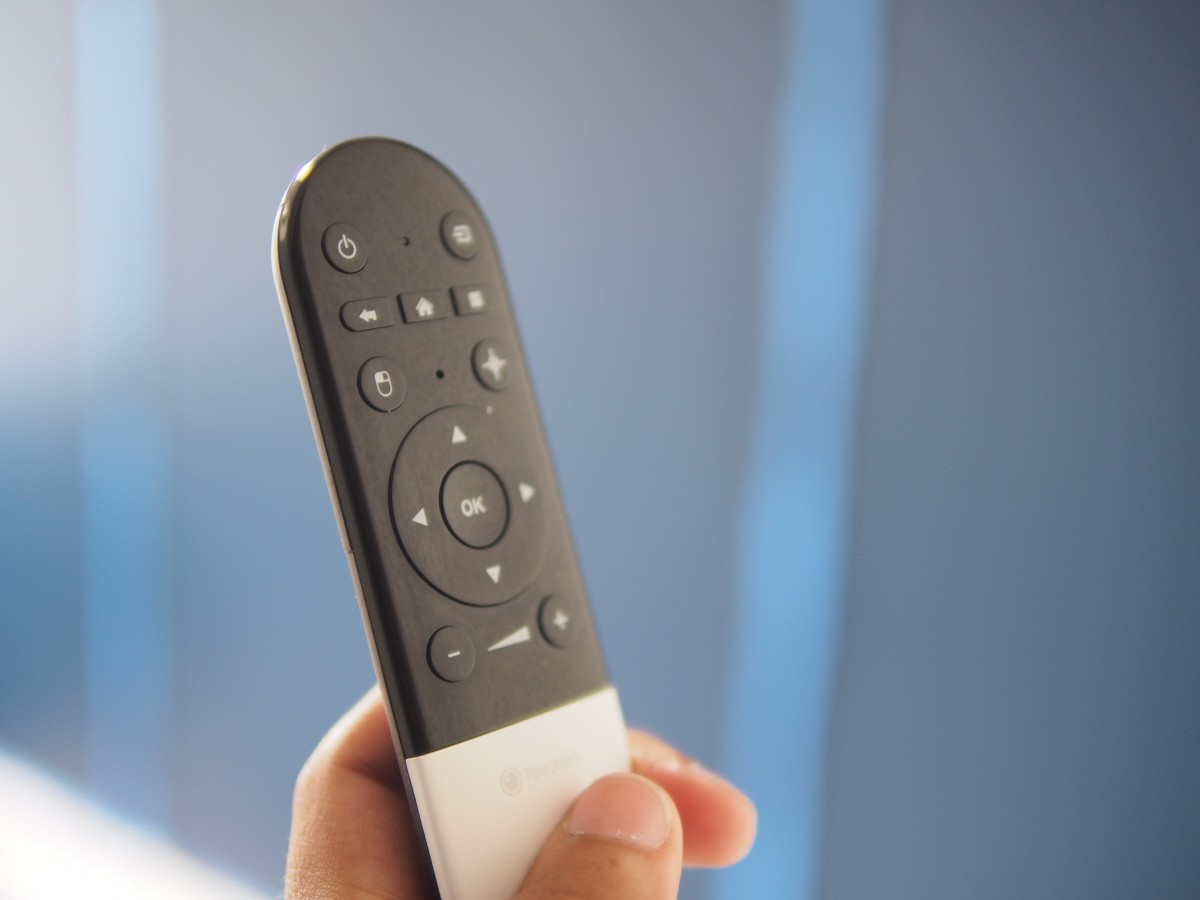 Both of these methods have their pros and cons. While the touchscreen is useful for navigating around the Android KitKat 4.4 interface and playing touch-based games (there’s no gyroscope, so forget about racing titles), it’s also easy to block the Pond from seeing the stylus’ infrared light. You quickly learn to adjust your body to avoid this problem, but you’ll still find it unresponsive on occasion.

The Airmouse, on the other hand, is very useful when you’re too far from the display to touch it; I found myself gravitating towards the remote when using the projector to watch Netflix or YouTube. Just remember to turn off the pointing ability if you put it in your pocket, otherwise the mouse will be zipping all over the screen whenever you move.

While it’s hard to say how successful the Pond will be at its price point, I found myself using the Touchjet frequently – the small projector is just a lot more convenient for watching content on a large screen if you don’t want to be stuck with a small laptop display or your living room TV (though Touchjet is also working on a way to make your TV a touchscreen).

The display quality may not be the best around, but it’s not hard to see how having a portable, giant Android touchscreen could be useful for teachers or families. As long as you don’t expect cinema-quality projection, Touchjet could be on to something.