Groovideo is a recent product of Silicon Valley Accelerator UpWest Labs, and the Israeli startup has a pretty neat Web and iOS app under its belt.

Groovideo’s mission is to help friends collaborate to create videos, with each individual recording their own video segment separately. The app then automatically collects the videos and edits them into a single film.

You first have to sign up using your Facebook credentials, and then choose which type of content you’d like to add. You can choose from a template of music and elements, and then send Facebook friends invites, instructing them what to record.

These instructions are designed to streamline the video-editing process, relaying the specific nature of the video (e.g. ‘Happy Birthday, Gran’), with an allotted time-frame in which to record. 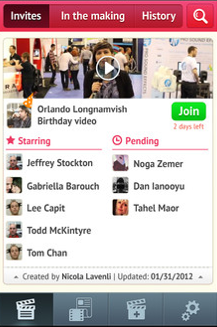 Each ‘friend’ records their own part using their own mobile device, and with each new participant entering the fray, the final flick is automatically re-edited into a new video featuring them.

It is actually a very neat app, and I can see the potential here, though I do have one small gripe regarding the signing up process.

Given that this app is very much geared towards friends collaborating, it’s understandable that Facebook integration should be a core element to Groovideo’s offering. But making it a necessary element may put some people off using it. It would be nice to have a choice of networks to sign up with, or simply let users create a Groovideo account.

It’s also worth mentioning Vyclone here, a collaborative video app designed more for the citizen journalist fraternity – it pulls complete strangers’ videos together to capture key events from multiple angles. Groovideo, on the other hand, is trying to find its niche in the special occasions’ video space, though we’re told that based on feedback, it could be looking to roll out new features that will extend its appeal beyond this in the future.

The Tel Aviv-based startup raised its initial seed from Israel’s Cedar Ventures. And following its time at UpWest Labs, the team is working between Silicon Valley and Israel towards growing the company.

Meanwhile, you can view the official promo video below.