Google’s Chromecast has become an important stop for companies in the content streaming space. Music service Grooveshark is the latest to announce support for the  HDMI dongle, which enables its paying users to stream content to a TV from desktop or mobile devices. 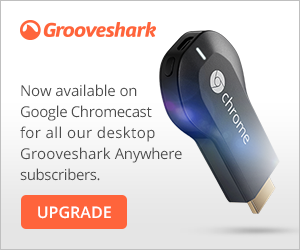 On the one-year anniversary of its launch, Google revealed that Chromecast users had “hit the cast button more than 400 million times” — that’s the kind of engagement that Grooveshark says prompted this move.

Grooveshark says its users spend on average 90 minutes with its service per session, with multiple visits per month. That’s a new metric we’ve not heard before.

The company previously revealed that it has passed 20 million active users, who stream over a billion songs each month from a catalog of more than 15 million tunes.

Rdio, Google Play Music and Pandora are among the Grooveshark rivals that already support Chromecast.