Whether you think the Google Maps event today was a rushed one in response to upcoming Apple news at WWDC or not, there were a few interesting things that came to us from the Maps team. 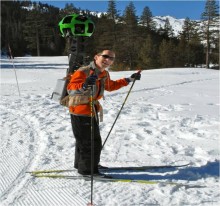 To me, the most interesting thing announced was the Street View Trekker. Yes, it’s a futuristic extension of what the company is already doing with its Street View cars, but there are a lot of really amazing things that can be accomplished with the device and the data that it grabs in the wild.

The main example of how powerful Trekker can be is in the case of finding a missing person. Almost daily we hear about men, women, and children vanishing, causing their friends and family members to scramble together a search party.

I’ve personally participated as a volunteer on one of these search parties — it’s a frantic experience — and I didn’t even know the person who was missing personally. Depending on where the missing person is from, groups of people band together and search high and low, through woods and mountains. Up until now, navigating those areas required experts who have mapped them out.

Trekker could change all of that.

What if you could participate in a search party by looking at a Google Earth project, seeing all of the areas that have already been searched. Places that have had exhausted efforts put into it could be tagged with pins. Places that still need to be navigated would be obvious. With Trekker, you could get a good idea of how to navigate those areas, without having to go in completely blind.

While the device is only available internally at Google right now, I did ask the team if it would be the type of feature integrated into Google Glass, eventually. The answer was a resounding yes, and by simply wearing the device camping, you could help Google build up a geographical database of the hardest to navigate places in the entire world. That completely blows my mind.

Could you imagine how helpful this technology would be if people were to turn up missing after a day of mountain climbing or rough terrain biking? By tracking all of the known routes in the world, on the road, and more importantly off, you could actually save lives with maps like these.