Google Maps has made a bundle of announcements today and it looks as though it is continuing to put mobile first with its latest enhancements.

Google Earth will now provide 3D models of entire metropolitan areas on mobile devices. It sounds cool, but Nokia of course provided its maps in 3D pretty early on.

Google says that it has been working on new imagery rendering techniques and computer vision that automates the creation of 3D cityscapes. This 3-dimensional world will be complete with buildings, terrain and landscaping from 45 degree aerial imagery. 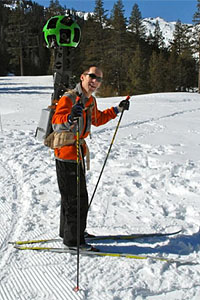 In a bundle of announcements today Google has said that it is going off road with Street View Trekker.

As Google started out with cars to capture routes and locations, it then gathered more details on snowmobiles and trolleys, now it is refining that a little more on foot.

There are some places where you just cannot drive, including conservation sites like the Grand Canyon and so Google technicians have been out with some rather strange luggage to capture this photographically.

It looks like hard work too – the image shows Luc Vincent, engineering director, taking the Street View Trekker for a trial run in Tahoe.

Underground train users rejoice, Google has also announced that its maps will be available offline for Android users in more than 100 countries in the next few weeks. The maximum size of offline files is about 50MB but many examples will be smaller than that, so hopefully this won’t be something that will break the average user’s data cap.

Offline files should be large enough to cover a metropolitan area. Google says the offline service can provide a map about the size of the San Francisco Bay Area and that the detail will come down to street level.

Pinning down accuracy in new places

Google takes mapping seriously. It’s not surprising as more of use rely upon online maps to get around by road or navigate through cities.

Accuracy is naturally a key element and so Google is also expanding Map Maker. Having already launched in South Africa and Egypt, ten more countries will be able to make use of the service in the next few weeks including Australia, Austria, Belgium, Denmark, Finland, Liechtenstein, Luxembourg, New Zealand, Norway and Switzerland.

Map Maker helps to improve accuracy and track real world changes through ‘Report a Problem’ where users can add notes and tips where change is needed.

It seems that Google is getting everywhere, from the bottom of canyons, to your pocket under the ground. It appears to be inescapable for monitoring (excluding Germany in part) but then again, will be find it too useful to say no?