Google Cast, the underlying technology behind Chromecast, is being baked directly into Chrome, and can be used for Hangouts.

The Chrome browser will have a new ‘Cast’ feature in the drop-down menu in Chrome 51, which is currently in beta. 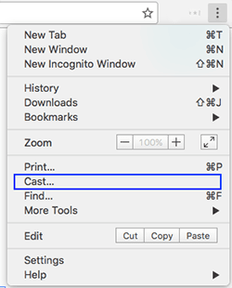 As you can with the extension, Cast simply lets you cast your browser tab onto a TV or other Cast-enabled monitor. While the extension may no longer be needed, it’ll continue to work — and may be a more streamlined option if you cast often.

Interestingly, Google has also offloaded things like streaming rate and screen resolution to boilerplate functions. Instead of manicuring a good stream, you’ll soon just be streaming while Google Cast does the heavy lifting.

Cast will also be found in Chrome OS.

Google’s chat service is also getting the ability to receive Google Casts.

A beta feature first spotted last May, Cast to Hangouts now seems to be rolling out as a stable release. In the comments section of an Android Police article noting the feature, one user notes it also peeks into your calendar to find scheduled hangouts:

I have this working (though buggy) in Chrome OS v52. My workplace uses Hangouts for our meetings. If I choose the Cast option in the menu it finds meetings in my calendar and lets me share my tab or desktop to the hangout. It’s similar to screensharing in a Hangout but there’s no audio transmitted. One use case is if you’re in a room set up with a Chromebox for Meetings and want to share your screen with everyone, without having to join the Hangout.

The support page for casting to Hangouts also lists ‘cloud services’ as options for casting, though doesn’t list any specifically. As casting seems to be best suited for video chats in Hangouts, it seems Google’s new Duo app could also see screencasts, but we’re betting Google is just laying the groundwork for any service that may use it down the line.

Chrome 51 is the stable release, but not all users are seeing the new Cast option in the drop-down menu. If you don’t find Cast as an option, give it time — Google tends to roll things out incrementally, stable or not.

Hangouts is also hit-and-miss on availability, but listed as an option for Chrome 52.