Google on Thursday dropped a dazzling display of technological ambition by revealing the smart contact lens project that its Google[x] moonshot lab has been working on. The lens tracks glucose concentration in tears in order to help diabetics manage their blood sugar levels.

The announcement is impressive in its own right, but there was something compelling about it that it took me a few moments to finally pinpoint – the project itself and the way Google is talking about is all very “Googley.”

Project co-founders Brian Otis and Babak Parviz even went so far as to reference Google’s original Founders’ IPO Letter to talk about why they pursued it. Specifically, the Google X team mentioned Larry Page and Sergey Brin’s comments that Google will place “smaller bets in areas that seem very speculative or even strange when compared to our current businesses.”

As Google has grown in recent years, the company’s unique culture has diluted and become less quirky. I hear a lot less talk about being Googley from Googlers, many of whom have shied away from those types of nicknames and rhetoric. I had high hopes for Google’s “Don’t be evil” motto, but the company seems to have strayed from it. In typical Animal Farm fashion, Google has gone from being the upstart and iconoclast to The Man and the monopolist.

Here are the aspects about Google’s contact lens project that inspire hope in me that the company’s DNA, its Googleyness, is still at work:

Page and Brin noted in their IPO letter that the company would not avoid “high-risk, high-reward projects because of short term earnings pressure.” The Google X division is a prime example of the company’s long-term efforts. Smart contact lens are the kind of research that are paid for by Google’s more pragmatic ad sales departments.

Interestingly, Microsoft actually worked with Parviz on this same technology back in 2011. I have no idea what caused Parviz to take his work from Microsoft over to Google, but the fact that it happened certainly makes it seem like Google was willing to take the risks here in continuing to fund the research and Microsoft wasn’t.

In revealing the project, Google admitted that the technology is still in its “early days.” The company has conducted multiple clinical studies with the technology and is in discussions with the FDA, but the truth is that this is still a few years away from ending up on our eyeballs. Google hasn’t even finished bringing its smart glasses to market, so a contact lens is even further down the roadmap. Still, the fact that Google is willing to talk about it at all is indicative of the company’s openness.

Collaboration is also part of openness. Google said it is looking for partners to help turn the prototype into a product.

By contrast, Apple, which has its own strong company culture, would have taken a different approach, preferring instead to hold off on sharing about the project until it was ready for a slick presentation and an imminent release date.

Google chose, however, to be open about what it’s working on. There are merits to both Google’s and Apple’s respective approaches, so I’m not saying one is better than the other. The point here is that Google is being true to itself, which is definitely a good thing. 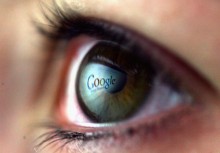 I’ve seen some complaints on Twitter about the fact that Google is looking into adding LED lights to this lens to provide notifications. While none of us want our contact lenses to flash when someone +1s a Google+ post, it’s important to remember the context here. These notifications are medical alerts intended to help diabetic users avoid any potential problems from dangerous blood sugar spikes.

Undoubtedly, Google would be interested in a smart contact lens technology for non-medical applications, but the tone of the announcement post is more about helping others than it is about making money, selling ads, or trying to force you to use Google+. I wouldn’t be surprised if those come eventually, but, for now, we can sit back and enjoy the researchers’ unbridled optimism.

Google’s mission is to “organize the world’s information and make it universally accessible and useful.” As the company has grown and acquired other companies, it has lost some of its focus. Projects like Street View and Google Books have reached incredible scale, but Google has also invested heavily in advertising and revenue-generating operations in order to keep up its growth.

Google X’s smart contact lens concept is, at its root, trying to solve an information problem. Diabetics struggle with gaining access to the right information – because getting it is painful and inconvenient. The lens is designed with one task in mind: find an easier way to collect and monitor valuable information and then notify the user when action is required.

Google could have stuck with working on its Glass project and still been a futuristic company. Instead, the company is already talking about the next step beyond glasses.

The current iteration of Google Glass doesn’t capture my imagination much, but smart contact lenses? That’s some serious next-gen stuff right there. We’re going to have a long wait before we’ve got Snow Crash-style virtual reality lenses, but our visions of the future will come true sooner if more companies invest in these kinds of long-shots.

Google hasn’t changed my entire opinion of it with a single blog post, but it has restored a little bit of my faith that it hasn’t lost its sense of identity. Microsoft may have teased this same technology almost three years ago, but today’s announcement is uniquely – and refreshingly – Googley.