This article was published on November 26, 2014

Following on from the recent release of its Chrome browser in Cuba, Google is expanding its product offerings in the Communist state. The company is launching Google Play and Google Analytics in the country today.

As the United States’ long-standing embargo heavily restricts exports to Cuba, Google is only offering free apps on Google Play, and only the free version of Google Analytics.

Third-party developers wishing to offer their free apps in Cuba will be able to do so via the Play developer console. While we were unable to obtain any official figures for the Android user base in the country, Google Executive Chairman Eric Schmidt wrote in a Google+ post following a visit to the country earlier this year that “a small technical community exists around free Android and expect it to eventually spread.”

Offering products in Cuba may seem an odd move for Google, seeing as there’s no hope on the horizon of being able to monetize users there. However, follows a trend for the company of expanding into restrictive regimes. Google Earth, Picasa and Chrome were launched in Iran in 2011, and Syria in 2012. 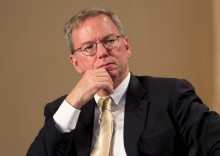 Schmidt’s trip to Cuba was part of a series of visits aimed at promoting a free and open internet that has also taken in Myanmar (where a local site and partial access to Play were opened last year) and North Korea.

“The Internet of Cuba is trapped in the 1990s. About 20-25 percent of Cubans have phone lines but mostly subsidized land lines, and the cell phone infrastructure is very thin. Approximately 3-4% of Cubans have access to the Internet in internet cafes and in certain universities.

“The Internet is heavily censored and the infrastructure, which we toured, is made out of Chinese components.   The “blockade” makes absolutely no sense to US interests:  if you wish the country to modernize the best way to do this is to empower the citizens with smart phones (there are almost none today) and encourage freedom of expression and put information tools into the hands of Cubans directly.”

In this context, the launch of first Chrome, and now Play and Analytics, makes sense. Google may be promoting open internet access for Cubans today, but by putting US products into the hands of the people it’s a subtle nudge to both Cuba and the US that restrictions on the small island just south of Florida should be eased off.

Indeed, Schmidt’s post from June ends “Cuba will have to open its political and business economy, and the US will have to overcome our history and open the embargo. Both countries have to do something that is hard to do politically, but it will be worth it.”