After months of speculation on what dessert would take on the “L” name for Android 5.0, Google has announced it will be called Lollipop.

The latest version of Android has over 5,000 APIs and a new aesthetic style called Material Design that is supposed to create a consistent feel across multiple devices including gadgets running Android Wear and vehicles equipped with Android Auto. The app also brings new security and notification features. The mobile operating system was previewed at Google I/O in June.

Google says that Lollipop is, “made for a world where moving throughout the day means interacting with a bunch of different screens—from phones and tablets to TVs. With more devices connecting together, your expectation is that things just work.”

The Material Design element has a flatter look and feel with bolder colors and typography. Google also says that the UI is more responsive and intuitive with natural motions and realistic lighting elements including shadows.

Battery life on devices running Lollipop will be extended up to 90 minutes when using the battery saver feature according to Google. A huge win for anyone that has to recharge their smartphone multiple times a day. It’s something that Samsung and Sony have had for a while, but now it’s going platform wide as a standard feature. You can also see how much time you have left on your current charge and how long it will take for your device to charge to 100 percent.

On the security front, the OS supports a kill switch that makes a stolen Android device worthless to thieves unless they know the password to reset it. Google also has turned on encryption by default which, judging by recent security snafus is a good thing. 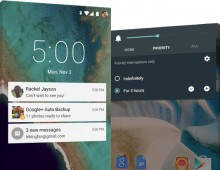 Plus, multiple profiles  are now supported on phones. If you have a kid that likes to use your smartphone to play games, you can now feel confident that they will no longer randomly tweet gibberish from your device.

Notifications have also been updated and users can now hide sensitive updates and prioritize their notifications allowing only certain contacts and notification types to get through. Something Motorola added to the original Moto X is now becoming standard on the platform. Plus you can schedule a quiet time to silence notifications.

The first devices running the updated operating system will be the Nexus 9 tablet,  Nexus 5 and Nexus 6 smartphones and the Nexus Player set-top box. It’ll land on Google Play devices and Nexus 4, 5, 7 and 10 in the coming weeks with Motorola’s Moto X, Moto G, Moto E, Droid Ultra, Droid Maxx, and Droid Mini also being primed for Lollipop.

➤ Android: Be together. Not the same. [Google]