At the Googleplex in Mountain View sits a team within the Search Features department that creates all the Google Doodles for the whole world.

Ever since co-founder Sergey Brin sketched out a simple Burning Man-themed reworking of the company’s logo in 1998, Doodles have become talking points for the millions of people who see the Google homepage each day. 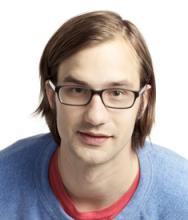 Despite consisting of just ten illustrators, four full-time developers and two project managers, the team managed to create around 350 Doodles last year. “The Doodle team is small but our resources are mighty,” says team leader Ryan Germick (pictured top in 2011) who describes Doodles as “a labor of love for the company… We have dozens of volunteers and collaborators and people providing translations and suggesting ideas for international Doodles.”

Indeed, as we chat, the whiteboard in Germick’s office includes notes about how light works, written out by two engineers from elsewhere in the company. They stopped by earlier in the week to give a physics primer to the team in preparation for a forthcoming Doodle that will celebrate a physicist.

From idea to homepage

So, how does Google choose what to celebrate in Doodle form? Germick says the focus is on things that are “good for the world” – innovation, technology, creativity, fun… “nerdy stuff” basically, as well as cultural occasions such as the 4th of July, Thanksgiving and their local equivalents around the world.

“We’ll get a suggestion from either inside the team, inside the company or a user or whatever, and we basically look at those suggestions and we pile them up and every few months we get together and see what’s our gameplan for the next six months or a year… How can we deliver the maximum amount of fun with our resources, for the maximum amount of people? That’s the equation that we’re constantly fiddling with, and so far, so good.”

For such a highly visible part of Google’s offering, it’s perhaps surprising that no marketing people get involved with selecting or approving the subjects of Doodles. “We don’t go through a marketing review, we don’t have a chart that says ‘we need to appeal to the 18-24 female demographic in the South’,” says Germick.

“It’s much more about ‘what’s the coolest thing we can do?’ We’ve got this team of talented people, we’ve got this company that believes in us and gives us the freedom to do this stuff – how can we make something awesome for hundreds of millions of people to enjoy? We’re just constantly trying to make good on that opportunity and optimize what we’re working on – it’s a great time to be alive and creative.”

The time required to create a Doodle can vary greatly, Germick explains. “It could be a couple of sittings if it’s a simple illustration, or it could be many months of a large team’s time, or large for us – we have half-a-dozen engineers touching a project sometimes. You look at the creative challenge or the opportunity that’s provided and whatever the topic is and you try to tackle it in the best way you can with the resources you’ve got. There not really any set process.”

One of the Doodles that Germick is most proud to have worked on is the emulation of an analog synthesizer that went live on May 23, 2012 to celebrate the 78th birthday of synth pioneer Robert Moog. Running on what were cutting-edge audio technologies at the time, it brought a fully-tweakable electronic musical instrument to one of the most popular pages on the Web.

“Web technology was just at a point where the Web audio API inside Chrome had matured to a stable build and we were able to take advantage of things that just weeks prior wouldn’t have been available. And for the Moog Doodle, we had a whole separate version that ran on Flash so that if you were using Firefox, Internet Explorer or Safari you’d still be able to use the Doodle. But Chrome was the only browser that had the Web standard audio APIs that had the low latency required for all the crazy sounds and music that you could make with the Doodle.

“We’re constantly try to keep up with the technology all the time, it really keeps us on our toes. Every new advance in the way people consume information is basically a new opportunity for us to be creative,” Germick enthuses, citing the interactive Pac-Man Doodle of 2010 as another example.

It wasn’t just the technological achievement of the Moog Doodle, made possible by the help of volunteer engineers from elsewhere in Google, that makes Germick feel proud, though. There’s also the way that people took to the instrument and shared videos and audio of the work they had created with it. “There’s something really wonderful about working on something and then releasing it and seeing the world do things with it that you never anticipated,” he says.

“I love being part of the process of making things that other people can be creative with. It becomes more than a sum of its parts. I can make a pretty picture and you’ve been like, ‘Oh that’s pretty’, but if I can give you tools to also take ownership and express your own creativity and we can put things out into to the world and it comes back with a life of its own, I love that kind of stuff. So I definitely want to see more of that kind of thing.”

Then there’s the educational element to Doodles. Germick cites the calculator graphic created last year to celebrate the 84th birthday of Shakuntala Devi, a woman so gifted at mental arithmetic she is known as the ‘human computer’, as an example of this. Germick had never heard of her before beginning work on the project, and it’s likely that many others who saw the Doodle won’t have either.

Surprising users with something they didn’t expect is a big part of the Doodle team’s modus operandi, which is why you’ll often find obscure anniversaries celebrated. The UK got the 63rd anniversary of the Peak District National Park last week, for example. “We didn’t want you to have to wait for the 65th,” Germick jokes.

Germick comes across as a man who really loves his job and sees Doodles as more important than just a bit of fun on a (popular) homepage. “In our world, it’s increasingly fractured. There’s not really a campfire for the whole world to go around, and we’re very fortunate to have this creative canvas at Google and a ton of people see it every day. We want to do something that’s worth their while as a token of appreciation.”

On Saturday this week, Ryan Gemick is moderating a panel on Google and the Future of Audio at the (quite frankly awesome-looking) Moogfest event in Asheville, North Carolina, where he’ll be joined by Doodle team member Leon Hong and Google Creative Lab’s Aaron Koblin and Alexander Chen.