This article was published on November 2, 2012

This post is sponsored by Best Buy. What will your gift do?

Let’s talk gifts. But not just any gifts. Let’s talk wireless because anything less is passé these days. So we’ve put together some gadget gifting ideas for the geek on the go, no wires included.

In case you’ve not heard, Windows 8 is all the rage these days. The touch-friendly interface is a great on tablets, and the traditional desktop interface works just as it always has for laptops and desktops. Lenov’s Yoga Ideapad convertible tablet/laptop is the best of both.

This little monster boasts an Intel Core i5 Ivy Bridge processor, 4 GB of RAM and an IPS display. When you want a tablet, just flip the keyboard around back and you’re touch-ready. But if you need more capability you can use it like a laptop as well. Best of all, it’s priced at under a grand, which is far less than what you’d pay for two separate devices. 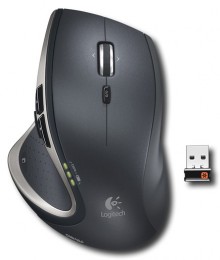 When the MX series mice from Logitech first came out almost a decade ago they were met with a healthy dose of skepticism. But now that they’re tried and true, they’ve proven themselves to be a favorite. The latest edition connects via a micro-USB receiver and sips battery life.

My personal favorite feature is the hyper-fast scroll wheel, but the new Darkfield tracking mechanism means that you’re going to be able to use this mouse just about anywhere.

Back when I first reviewed the Netgear R6300 I was blown away by the wireless gigabit 802.11ac connection. After having used the router for a number of months I can now tell you that it’s my hands-down favorite and its price blows away anything else on the market.

If we’re talking wireless then making sure that you have a strong, reliable WiFi signal around your house is paramount. With the R6300 I can even walk outside, to the back of my rather large yard, and never once drop my connection. It really is the very best router you can buy today.

OK so it’s time to give Logitech a bit of love here for these next two, but only because the company deserves the credit. If you own an iPad then chances are that you’ve found yourself wishing for a keyboard at one time or another. While Apple’s own Bluetooth keyboard works great, Logitech’s Ultrathin Keyboard Cover is designed specifically for the iPad and has some features you’re going to love.

First off it works just like the Smart Cover, by clipping onto your iPad with magnets. It also has the auto-off magnets along the front, though I’ll have to gripe a bit that it doesn’t have magnets to actually hold the cover to your iPad. I also wish that there was some way for it to grip to a table better because the slick bottom surface makes it a bit unwieldy.

Though even with those two caveats the Ultrathin Keyboard is the absolute best iPad-specific keyboard I’ve used. If you still think that the iPad is just a consumption device, consider this – I just did this entire blog post, links, images and all, from my iPad…using the Logitech Ultrathin.

Grabbed a Nexus 7 or maybe a Galaxy Tab 10.1 and looking for a keyboard? Logitech is back again in our roundup with the single best Android tablet-specific keyboard I’ve used. The Keyboard for Android includes the function keys that you’ll want, and a keyboard size that you’ll love. Key travel is great, response is stellar via Bluetooth and the price is right as well.

I actually like the form factor of the Android device better than I do the iPad version. But with having to be compatible across so many tablets it’s easy to understand why there’s no built-in slot for holding your device. So Logitech compromised by providing a case for the keyboard that also doubles as a stand for your tablet. Once again, these slates aren’t just for consumption. With power and capabilities increasing all the time, they’re the future of how you’re going to work.

So now that we have your computer and/or mobile devices, it’s time to get them pumping some sounds. When I reviewed the JayBird Freedom Bluetooth headset I immediately fell in love with something so sleek and with relatively great sound quality. But I wasn’t so hot on the microphone portion. Its placement just didn’t allow for the best voice pickup. With the Freedom Sprint, you get all the good of the headphones, but no microphone included so you’ll save a few bucks.

With respectable battery life, a huge amount of combinations for fit and feather-light weight the JayBird Freedom Sprint is something that you’re going to want to carry with you to the gym, on your trips and generally everywhere else you go.

Finishing out our roundup is the absolute best Bluetooth speaker you’ve ever heard…and then one that’s even better. The Jawbone Jambox is packable, portable and downright crazy loud with stellar sound quality. So how do you improve on that?

You make it bigger.

The Big Jambox is a Jambox, but bigger and better. Measuring in at just over 10 inches in length it packs huge power in a tiny, 2.8 pound package. Oh, and it also includes a high-quality microphone so you can use it for Skype or any other voice chat service of your choice. The included MyTalk service allows it to be customized, it will get you exclusive apps and it’s also your key to future software updates.

So there you have it. Wireless isn’t just a handy thing these days, it’s the thing. But now you don’t have to sacrifice quality when you get rid of those wires. When you’re shopping for your geek on the go this year, these are a few of your must-haves.