Back in April, when I got the press release about the Netgear R6300 router, I was intrigued. It was set to be the first 802.11 AC-band router, promising gigabit speeds over WiFi if you have a compatible wireless card in your device. My test units arrived today, so I thought it only fitting to take a first look at what sets this $200 beast apart from the crowd.

The first thing that I noticed is that, in the quick start guide, Netgear has mentioned that wireless security is set up from the first power-on. On the side of the box you’ll have a tag that shows your SSID and the network key. You’re advised to not change these, but you’re of course welcome to do so if you choose.

Also, there are two networks, one for 2.4 Ghz and another for the 5 Ghz range. If you happen to have a lot of interference around, or if you just have a load of devices and want to split the network, it’s a great option to have.

Next, it’s well worth mentioning that the 6300 actually looks…good. It’s hard to get a sexy factor in wireless gear, but Netgear has done an admirable job here. Sleek lines, understated lightning and hidden buttons all add to a facade that you’ll not mind sticking onto your shelf. 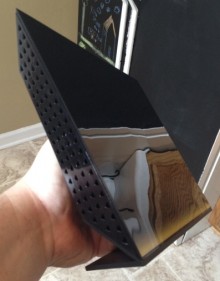 Setup is, to put it lightly, dead simple. Plug in the router, connect to it and open a browser. You’re taken to a roadblocked browser page where you can tweak settings as you like them. If by chance you aren’t taken to the page, a simple navigation to http://routerlogin.net will get you there without having to find your device’s IP address. There’s also a mobile app, if you’re so inclined.

Once inside, the browser-based configuration pages are not just good, they’re fantastic. Netgear has managed to do what only aftermarket options such as Tomato had accomplished before – keep it simple, but provide the options necessary to dig in deep.

I’ve not played around with the device too much yet but my initial tests show that the R6300 provides a better range than my Apple Airport Extreme. It also plays friendly with AirPlay, as well as iTunes Home Sharing, which is more than I can say for the craptastic device that my ISP was renting to me.

Speeds seem to be in line with what I’d expect, but the increased range means that I keep the connection-maxing speeds at much further distances than I had experience previously. The idiot-proof bridge mode, whereby you can connect a second 6300 to extend your network’s range, means that those willing to drop an extra $200 will have exemplary wireless coverage in any normal-sized house.

There are some other fantastic options on the device, including dual USB ports for storage and/or printer sharing, DLNA streaming, guest access and parental controls. Again, I’ve not yet had time to dig in and work with these, but I will be.

Over the next week or so I’ll be giving the Netgear R6300 an in-depth test. With no fewer than 8, and sometimes up to 20, wireless devices connected through my house on a daily basis, I should have plenty of opportunities to push the router as far as it will go. Have something I should try? Hit me up in the comments so we can get all of your questions answered.