The latest social app to hit our radar is designed to help make people’s free time “more social and fulfilling, by offering a new take on location-based social networking.” Huh?

Glomper was developed over the course of a year, and the result is an app that helps you synchronize your spare time with friends that are nearby.

Available for iOS and Android, the idea is that you coordinate meet-ups with folk you know (or don’t know) based on where they are/will be.

First up, you search for plans that others have posted, and then check-in to events created through the app. And if you have no specific plans, well, that’s fine too – users can also list themselves as ‘available’, without specifying a particular course of action.

Thinking about it, this isn’t all that bad an idea in principle. I have found myself, on occasions, tweeting or posting a Facebook message if I happen to be somewhere unexpectedly, with time to kill. And I often see tweets in my stream, along the lines of “I’m currently in Leicester Square, anyone I know fancy meeting up for a coffee?”

With that in mind, Glomper’s main focus is more on short-term user availability, where only a little advance notice is needed. With this approach, Glomper founder and CEO Alexander Borodich says that he wants to empower people to minimize “lonely free time”, and replace it with more fulfilling social time. With friends, of course.

“Free time has become a very scarce commodity in our fast-paced lives,” says Borodich. “Through listening to user feedback, we realized the real problem is being alone when they had free time. Glomper helps you get the most out of your free time by adding a social element to time, creating Social Time.”

You just push the I’m Free button, select the time and duration of your availability (your location will be detected automatically by GPS) – and that’s it, all your friends who are nearby now will know that you are available for a coffee, a movie, dinner…and everything in between. 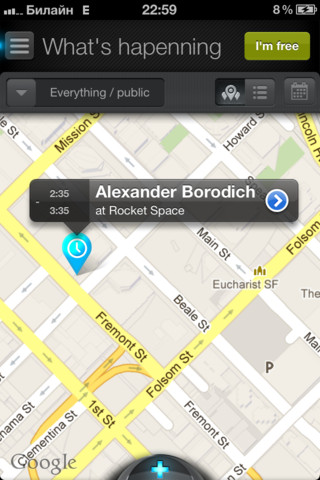 Glomper integrates with Facebook and Twitter, which pretty much covers most of your social networking needs, though LinkedIn would be a good addition here, if you’re looking to do a bit of impromptu professional networking.

Borodich is envisioning a new category of social apps rising under the ‘Social Time’ banner. And it has some good people behind the venture, such as Igor Matsanuyk, one of Russia’s most prolific angel investors.

While Glomper is a nicely designed app, and there IS real potential here, it’s such a difficult space to gain traction in. Without a strong user base, and Facebook itself a decent alternative to hooking up with friends at short notice, will people be willing to find space for another social network in their lives?

The jury’s very much out on Glomper. But it is worth checking out.