If the suite of phones that have been unleashed on the world on the past year is any indication, Samsung has come out swinging in 2012. Boosted by successful sales of many models, including the popular Galaxy S III and Google-advised Galaxy Nexus, the Korean telecommunications company has made a leap ahead of the pack and become the biggest player in the smartphone sphere. And, with its newest phone hitting the market, it’s easy to see why.

The Galaxy Note II is as perplexing as it is thoughtful, an amalgamation of everything Samsung does well jammed into a 6-inch mega-phone (or mini-tablet) that has a surprising amount of weight to its presence. This so-called “phablet,” a successor to the critically mixed yet commercially successful Galaxy Note, is definitely more aggressive than its forebear and offers more delights than its size would indicate.

But first, the size. One of the standout quotes from a salesperson at the Galaxy Note II event held on October 24 is that the phone is “not for everyone” — and it’s absolutely not for people with small hands. Six inches is a tricky length for a phone simply because it almost always requires two hands to operate; and while the software attempts to ameliorate this issue with a “one-handed” setting that can be activated, it never feels fully natural to hold.

While the size itself is great for commuting, with the 5-inch 1280 by 720 super-AMOLED screen providing a bright and captivating display for everything from a Youtube video to a good round of Jetpack Joyride, plucking it out of a pocket or bag (especially mid-motion) feels like an unstable process.

Holding it in landscape one-handed is nearly impossible without hand cramps and a constant worry of dropping, leaving much to be desired in the way of accessibility. In short, the phone never stops feeling big, which makes it a hard sell on its phone features at face value.

Luckily, there’s more to the product than its hardware, and Jellybean, the newest Android operating system. is a real treat. Seamless, quick and responsive, with smartly integrated haptic technology and colors so beautiful it could make an onion cry, it’s hard not to fall in love with the software that comes standard with the Note II.

The quick and painless adjustment period is likely to ease the mind of those concerned with the Android “learning curve,” and it’s chock full of preloaded apps (such as Flipboard) that knock the socks off of the traditional smartphone experience by taking advantage of the Note II’s screen. Of course, the main draw of Jelly Bean is integrated Google services, which feel like a coup de gras in the way of Apple’s fumbles in iOS 6.

For one, Google Maps on the Note II is far and away the most satisfying maps experience ever — a concerted effort that supercharges everything people love about maps (frankly, that they function correctly) with extra features such as a smart memory that keeps track of all searches you’ve made — including searches on your computer — and full breakdowns of transport schedules. Interacting with the Note II is a breeze, and Jelly Bean brings a lot to the table in facilitating it.

But not all software features are hits. One particular niggling gripe is the inclusion of premium and carrier-based services, such as AT&T Navigator and Music Hub, on the phone — a strategy that largely places bloatware at the forefront of menu screens and means that some stringent cleaning should be done before the phone can be enjoyable.

Second, there still seems to be a dearth of apps that take full advantage of the “S pen,” the stylus that comes standard with the phone. While the Note’s signature app, S Note, intends to capitalize on the stylus’s full use, the incorporation of the tool often feels forced and rarely looks complete. And, while there’s been a great leap in handwriting-to-text conversion (for those who are keen to write their notes), but it still feels slow enough to not be a go-to feature for note-taking. 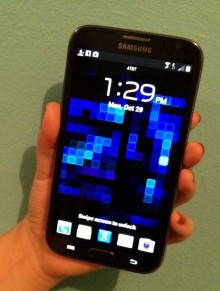 Of course, none of these apps can run without a battery, and that is another feature that leaves something to be desired. Although the battery itself is massive, it is all-too-quick to run dry and takes forever to recharge. More often than not, if you are inclined to use the phone often for video, apps and note taking, you’ll have to settle for a midday charge and prepare to still have a dead phone by the end of the day. Even when sitting plugged-in while active, the battery can never quite make it back to a full charge — the power draw is just too high to keep the phone on. It’s not a stretch to believe that this is due to the juice that the screen takes to run, but even tapping into the phone’s “Power Saving” mode feels like too little, too late.

When it comes to overall performance, it’s really difficult not to compare this model to the iPad mini. While both are seemingly at opposite ends of the spectrum, with one being an outsized phone and the other a shrunken tablet, they both pack enough goodies to keep consumers looking for a mid-market (re: low-priced) entry into the tablet market.

While the Note II has cornered cost (at $299, it’s still $30 less than the iPad mini) and usage (for making calls), it’s really difficult to see the Note II as a true multi-use product that satisfies both the tablet and the phone well enough.

However, the Galaxy Note II is a sign that Samsung is pulling ahead and taking advantage of the sophistication and style of the latest Android builds — something that not only makes them ta top competitor among similarly outfitted smartphone contemporaries, but hints at a bigger effort to swipe Apple’s profits. All said and done, the future is looking bright for Samsung.