We’re getting there…As long as you have a smartphone with web access, you can pay for many things, peer to peer style over the Web.

“Dwolla is an amazing company in the payments space, looking to re-imagine what a company like Visa or Mastercard would look like if started today (and not 40 years ago with its associated legacy costs),” writes Alex Taub, the newly poached “Biz Dev Builder” of the Iowa-based peer-to-peer mobile payments platform.

One year ago, we wrote about Dwolla opening its API, and in July 2011 we reported that Dwolla was churning out over $1m worth of transactions each day. Starting today, Taub will be leading business development and API partnerships, similar to what he did at Aviary, a New York City startup famous for its mobile photo API. But he wasn’t the only New Yorker poached to join the rapidly growing, recently Ashton Kutcher-backed startup. Taub’s good friend Michael Schonfeld, formerly of Nerve Dating, will be joining Dwolla as a developer evangelist. The two will establish Dwolla’s satellite office in New York City. 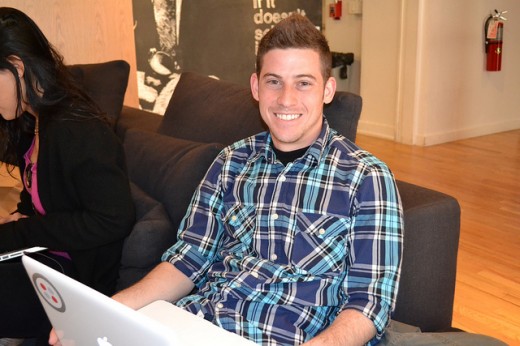 In September 2011, we interviewed Dwolla’s founder Ben Milne to get some of his thoughts on Dwolla so far, and the future of mobile from his company’s perspective. In the interview, he said the company was still dealing with growing pains, rising from a two-person company to a 15-person company in 2011. Seems like the company has stabilized its canter as it continues to expand across the nation.

“I’m out in Iowa this week, but I will be jumping right into third-party integrations. If your business is creating revenue and you are paying a percentage of that revenue in credit card fees, you should consider adding the ability to accept Dwolla as a payment option. Any transaction under $10 is free for the merchant (great for something like iTunes, Zynga payments, charity donations). Any transaction over $10 is a flat fee of 25 cents for the merchant. That’s why merchants love Dwolla and why the entire financial industry has taken note,” writes Taub, already busy to work promoting his new company.