Cryptocurrencies are renowned – and often criticized – for their volatility. It’s what makes them both risky and attractive for skeptics and investors.

Over the past decade, the mainstream press has largely ignored Bitcoin, generally focusing its coverage on the digital currency‘s association with crime and its sudden price movements.

It’s therefore not surprising that Bitcoin‘s recent value rise resulted in countless headlines, with many industry commentators taking the opportunity to chime in.

Unlike fiat currencies, such as the US dollar, which are controlled and regulated by central banks and governments, Bitcoin is knowingly allowed to roam free in the wild. So, while we can potentially explain a drop or an increase in the dollar‘s price based on specific world events, when it comes to Bitcoin, we’re often left to speculate.

With this in mind, Hard Fork decided to take a look at the most discussed and likely triggers for the price jump. Here’s what we found.

Outlets, including Reuters, echoed the theory that Bitcoin‘s staggering price rise could have been due to a huge order placed by a mystery buyer.

According to Reuters’ report, exchanges in the US and Luxembourg seemed to have processed a single purchase worth about $100 million. Although cryptocurrency exchange BitMEX downplayed this theory, noting that only a fraction of its clients’ positions were affected by the volatility.

It goes without saying that purchasing Bitcoin is not the same as buying a bond, a stock or investing in fiat currency. This means that monetary policy, inflation rates, and economic growth metrics, which typically impact the value of currency don’t apply in the cryptocurrency arena.

Several factors can impact Bitcoin’s price: the supply and market demand, the number of competing cryptocurrencies, the exchanges it’s traded on, regulations governing its sale, and its internal governance.

Theories about market controllers have been around for a while. In October 2014, a Bitcoin whale liquidated some 30,000 Bitcoin for $300 a coin. At the time, many traders and speculators believed it would cause havoc in the market, but the order was actually ripped through by buyers and Bitcoin‘s price increased to $375 a piece. This event forms part of Bitcoin’s colourful history, with the trader now widely referred to as “the bear whale.”

Other outlets highlighted the potential effect of an April’s Fools joke published by Finance Magnates, which claimed that the US Securities and Exchange Commission had taken the decision to approve a Bitcoin-based exchange traded fund (ETF).

If true, Bitcoin enthusiasts would have seen this as a monumental positive for the cryptocurrency, but unfortunately, the US regulator has consistently failed to make a positive ruling on the ETF. 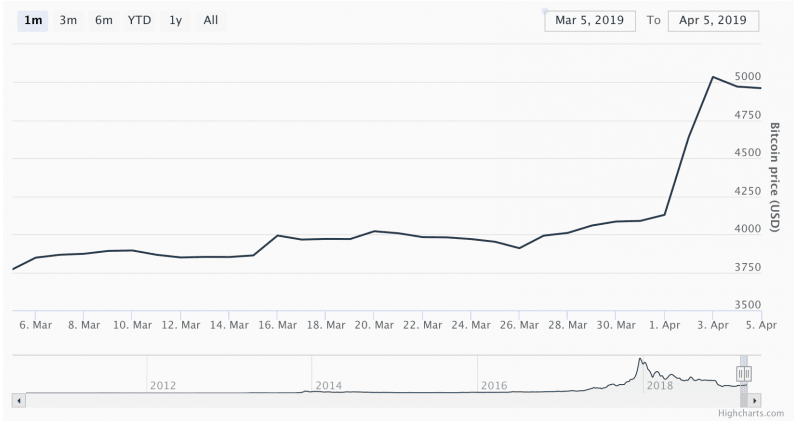 Finance Magnates eventually updated its article to clarify it was a joke, but by that time, Bitcoin‘s value had already surged considerably. In fact, charts show that Bitcoin‘s price rose by 20 percent in less than an hour, hitting $5,080 on April 2.

The article’s timing means it’s unlikely that it was solely responsible for driving the price, but it could have possibly helped fuel a positive movement in the market

Speculation also mounted about the possibility of rogue Bitcoin trading bots being used to drive up the price.

Traders could have easily set up bots to monitor online conversations for certain Bitcoin-related keywords that may indicate a potential market shift. Bots would then placeorders in anticipation of Bitcoin‘s price moving upwards.

It’s worth noting, though, that botsdo have limitations and in this instance it’s possible that the creators may not have accounted for the possibility of fake news or an April’s Fools joke.

“It’s about getting there first. In this instance a trading bot cannot tell an April Fool’s from a real thing,” George McDonaugh, chief executive and co-founder of blockchain investment firm KR1, told The Independent. “So if you have a system in place to recognise the words ‘ETF‘ and ‘approved’ to immediately trigger large scale buys, then theoretically this could lead to a big move.”

Some experts argue the price jump could be attributed to Bitcoin’s upcoming ‘halvening,’ an event which will see the cryptocurrency‘s mining rewards slashed in half.

A halving is a scheduled event that typically takes place every four years. The process was built into the Bitcoin network in a bid to control inflation, while also creating scarcity around the asset.

As previously reported by Hard Fork, the price didn’t really move during the last halvening. But, some attribute the 50 percent price increase (from $430 to $650) in the three months prior to the event, but there’s little evidence to prove plausible causation.

Last but not least, Alex Krüger, an economist focused on cryptocurrencies, speculated last Friday that the rally could be due to Bitcoin breaking above $4,200 – perceived to be a key testing point for the market as it was previously the highest value reached so far this year.

The crypto bear market has been over for three months now. $BTC breaking above 4200 will mark the end of the bear trend that started in January 2018. Going to miss this big fellow. pic.twitter.com/nzsUhmDYXm

Although Krüger’s theory could possibly be on the money, it’s again hard to tell whether the cryptocurrency‘s upwards trend was solely caused by this.

What this tells us

Given Bitcoin‘s tumultuous activity over the past decade, it’s not surprising that experts and analysts are desperate to predict what will trigger the next bull market. Still, the fact of the matter is that while some theories are more plausible than others, they are simply speculative.

What’s perhaps most telling is the media‘s ongoing fascination to focus on Bitcoin‘s negative connotations – how it’s used by nefarious actors as a means of payment to fund illicit purchases and activity – and its incessant price movements, which are always difficult to explain.

Bitcoin‘s volatility will continue to fascinate market participants and spectators alike, and if this past week is anything to go by, it’s obvious that we all continue to be fixated with the price. In turn, and I am sorry to say, this proves my lasting theory that Bitcoin – at least for now – is still largely perceived as a speculative tool and is yet to find its killer app in the real-world.

This is not trading advice. As with any financial instrument do your own research and consult a registered, independent financial advisor before parting with any money.