The Focal Radiance is the literal Bentley of headphones. A limited edition model by the French high-end audio company, the headphones were designed in partnership with Bentley, while retaining much of the design language of Focal’s other luxury headphones. Thankfully, they retain that high-end sound as well — as one would hope, for $1,300 (£1199/€1300).

The Radiance is a gloriously flashy closed-back headphone. The black design with copper accents and diamond grille pattern looks stunning in person; it’s the best looking of Focal’s headphones I’ve seen to date, though I do dig the new Celestee‘s blue design too. 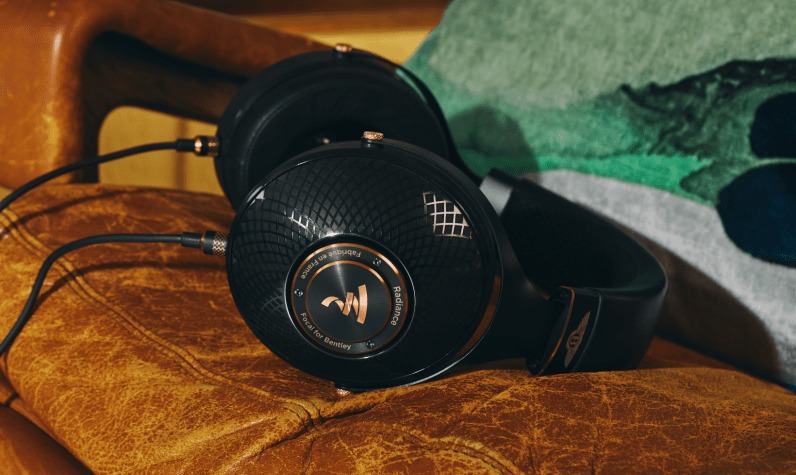 Although a new design on the exterior, the Radiance follows the geometry of Focal’s other high-end headphones. That’s mostly a good thing, if you ask me. It’s a comfortable design that I can wear for hours on end, and they block out a decent amount of noise too, although it won’t be able to attenuate low frequency rumble the way a proper noise-canceling headphone would. Still if it ain’t broke, don’t fix it, I suppose.

Although an expensive, wired headphone like this wouldn’t exactly be my first choice to use on regular trips around town — Bluetooth is just too convenient, and the differences from wired audio are increasingly small these days — the headphones are easy to drive without a fancy amplifier. Whether using a cheap decent headphone dongle, your PC’s headphone jack, or a proper headphone amp, you should have enough power to listen at a comfortable volume.

And I’m tempted to bring them around town because they sound so darn good. The Radiance are very close to neutrality for me right out of the box.

The Radiance maintains the typical Focal headphone qualities of smooth mids and detailed highs. Here there is just not much to say — the headphones sound rather transparent without becoming too harsh for my tastes, though I might’ve preferred maybe a touch more energy in treble; your mileage may vary. But unlike the company’s open-back headphones (like the Focal Clear, one of my all-time favorites), the Radiance actually brings a serious amount of bass. It gives Focal’s own $3,000 Stellia a run for its money.

I always like a headphone that can comfortably deliver into the sub-bass, and that’s the case here, with the headphone comfortably extending below 20Hz for that all-important rumble in movies and hip-hop. If anything, the headphone’s most notable flaw is that it might have a bit too much bass energy for my tastes higher up, at about 150Hz or so. This will ensure a good amount of ‘thump’ to your music, but it can occasionally muddy up the sound a little bit.

But I’m mostly splitting hairs; the Radiance performs admirably in its tonal balance, and the soundstage is similarly pleasant. While it certainly won’t sound as expansive as an open-back pair of headphones, it’s a more expansive soundstage than most closed-back headphones I’ve tried.

The tonal balance performance is evident in some rudimentary measurements as well. In the graph below, the dotted line represents the most recent Harman frequency response target for headphones, developed through years of research into the listening preferences of people around the world. The target is generally found to be perceived as both neutral and enjoyable by listeners.

Although not everyone enjoys the sound of the Harman target, I use it in my reviews because I have consistently found my own preferences to follow the target; you can generally trust these graphs follow my own listening impressions. It’s also worth pointing out the graph above is just meant as a rough quantification of tonality; given the limitations of my measurement equipment, the data is most accurate in the midrange and bass, and increasingly unreliable above 2kHz or so.

Those disclaimers out of the way, you can see the Radiance roughly follows the contour of the target response. You can also see some exaggerated bass around roughly 80-200Hz, likely the source of the slight bloat I seemed to be perceiving, though again, you might like the additional bass. The midrange, meanwhile, follows the target very closely, and the highs generally track the contour, although the headphone might be missing a little treble energy below 10kHz (perhaps more notable given the slightly overemphasized bass).

These are small critiques. On the whole, my impression is that the Radiance performs as well as any of Focal’s high-end headphones — practically on par with the more expensive Stellia, which uses fancier drivers. Though you don’t need to spend $1,300 for good sound, if you’re the type of audio enthusiast that doesn’t think it’s unreasonable to spend this kind of money on a pair of headphones, the Radiance are among the best closed-back headphones I’ve heard.