Flipboard announced that it is adding audio to its blockbuster social magazine but another important detail that the company also revealed today is the launch of a fully localized app in Japan, as it continues to tap into international demand for the service.

Japan will be the second Asian market to get its own local app — following the launch in China last December — and the move sees the company focus in on the country’s growing market, where smartphone device owner grew 28 percent in the last quarter.

Updated below with details of the service and partners.

There are plenty of ingredients for success in Japan. Apple’s products are particularly popular in there, and the iPhone was the biggest selling smartphone in 2011, selling more than 7 million units.

Equally, looking at rival products, Japan has plenty of scope for Flipboard to develop. The country is Evernote’s second largest market, for example, where it has upwards of 6 million users there, demonstrating a healthy interest in content-related apps and services. 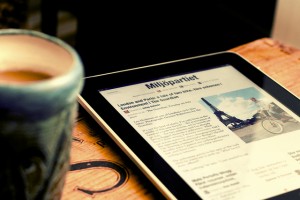 The upcoming launch of Android app will also be a key initiative in Japan, where the Google-owned operating system accounts for 61 percent of active devices, according to a recent comScore study.

Flipboard CEO Mark McCue recently revealed that the number of downloads in China is close to surpassing the US, and the company is focused on tapping into international potential, as other popular apps are doing too.

Update: Flipboard has got in touch with more details of the service in Japan, including news of its first confirmed content partner, Nikkei Business.

A spokesperson told us:

We launched the Japanese edition of Flipboard at 6pm PT, May 15, which as 10am Japan Time on the 16th.

The Japanese edition contains a Content Guide with hundreds of recommended publications and other content sources. We’ve been working with Nikkei Business to feature their content — they provided us with a special RSS feed for a more beautiful reading experience. We’re talking with a number of other publishers as well — so far the reception has been warm.

The company is aiming to bring Flipboard Pages, its service that turns content into digital magazines, to the country later this year and is expecting that the feature will bring new content partnerships.

Though it doesn’t yet have an office in the country, Flipboard says that it has “several team members in Japan on a regular basis” and is in the process of building a dedicated local team in the country.

Update 2: Flipboard’s blog post announcing the Japanese app has details of the ‘Cool Curators’ feature for Japan, which includes curated news and photos:

Cool Curators offers a unique peek into many of Japan’s premier tastemakers, among them tech journalist Toshinao Sasaki who’s known for curating from an extraordinary collection of sources. (Over 153,000 people follow him on Twitter.) We also love@tokyofashion’s Instagram feed of the out-of-this-world style coming out of Harajuku, the 500px photos tagged #Japan and Flipboard Picks—Japan, our own hand-curated feed featuring beautiful and interesting articles, photos and videos.