Earlier this month Facebook accidentally pushed it’s latest app, Slingshot live in Malaysia. Well it’s back and this time the ephemeral messaging app with a focus on trading photos and videos is here to stay. For reals this time.

Slingshot, the new iOS and Android app from the Facebook Creative Labs puts a new twist on ephemeral photo and video sharing. In order to see a photo or video sent to you by a friend, you have to reply with a photo or video. 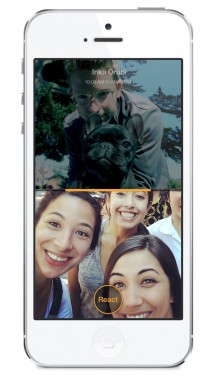 There’s even music that plays while your drawing on photos. The app, while relatively simple, is full of tiny little flourishes. When a photo is sent, it shrinks down to the bottom center of the screen and launches off the screen like a tiny rocket. But Product Manager, Will Ruben says that creativity is meant to bleed into the users, “it’s an app where everyone is a creator and no one is a spectator.”

The app was born during a Creative Labs hackathon in December. And while it borrows features from other well known apps like Vine (videos loop), Instagram (the videos can be up to 15 seconds long), and disappearing images like Snapchat, it presents them in a fun package.

But the app is cannonballing into a crowded pool of messaging services. Being a Facebook product doesn’t offer any real advantage. The social network’s Snapchat clone, Poke was pulled from the app store in May along with Facebook’s Camera app.

Ruben says that the app was built “purely out of excitement about the idea.” Facebook is hoping that excitement carries over to user engagement.

➤ Slingshot for iOS and Android

POLL: Do you think Slingshot will be a hit? Let us know in our quick poll below: