Facebook is trying once again to enter the increasingly crowded ephemeral messaging app market with Slingshot, a photo sharing app. But unlike Snapchat and other services, before you can see a photo, you need to reply with a photo of your own. 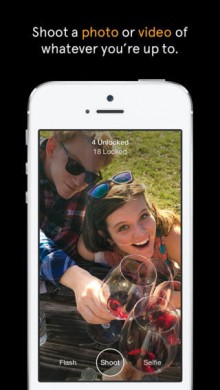 The app is the social network’s second attempt to take on Snapchat. The company’s Poke app launched to much fanfare only to fizzle out quickly and get pulled from the App Store.

Unlike Poke, which was pretty much a Snapchat clone, Slingshot adds another element to the mix. By forcing you to send a picture (or “sling” as Facebook is calling it) to see a picture , it could potentially raise the engagement level in the app.

After a photo is unlocked, you can reply with a reaction shot. Once a photo is swiped away, it’s gone forever.

The app, while currently in the App Store, is unavailable in the United States, but it looks like it’s on a global rollout and hopefully will become available in your country soon. We have a query out to Facebook about the release and we’ll update this article once we get comment or the app hits the US App Store.

Update: The app seems to have been pulled from the Malaysian App Store. Facebook told the Verge that the Slingshot app was accidentally released.