Facebook’s Creative Labs loves creating new apps. From Slingshot, to Paper, to Rooms, the team seems to be pumping out new apps every time we turn around. The latest to come from the potentially over-caffeinated team is for fans of Facebook’s Groups feature.

Starting today, Facebook Groups gets its very own app. The Groups app is available for iOS and Android and streamlines the UI of the Facebook feature on mobile. 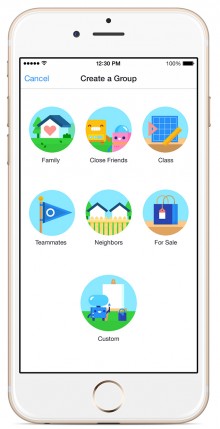 Facebook says that 700 million people interact with a Facebook group every month. With that in mind, the Creative Labs team wanted to build something to make the mobile experience easier and faster to interact with.

The new app makes it’s simple to quickly create, join and navigate between groups with a few taps. In addition to joining groups created by friends and family, there’s a new Discover tab that surfaces groups you may like based on the groups and pages you’ve already joined and where you live.

For example if you are a member of a bicycle group and you like the Tour de France, you might see a nearby group for weekend bike rides under the Discover tab.

If you’re a fan of Groups but not a fan of having to use a separate app to use a Facebook function a la Messenger, there’s no need to worry. The Groups feature will continue to be part of the main Facebook app.