Facebook has updated its iOS Messenger app in the UK today to include VoIP calling, just as it does in the US and Canada. This feature is live now – it doesn’t require you to download an updated version of the app.

You may remember back in January, we reported that Facebook pushed updates to its Messenger app in Canada which included a potentially disruptive feature: voice calling and messages. 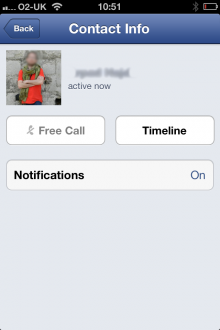 The Messenger app, which is separate to the main Facebook social networking app, was outfitted with a new option alongside the photo and camera buttons, offering a ‘Record’ toggle that can be pushed and held to record voice messages. Then later that month, Facebook rolled out a new feature to US users too which let them make free voice calls.

While it was only a matter of time before Facebook started rolling the feature out further afield, it’s still a significant step for the company and sees it go up against the likes of Skype, with the calling feature working over WiFi or 3G.

Indeed, this move sees it not only going up against Skype, but mobile network operators too. Facebook has somewhere in the region of one billion users, and letting them call each other directly through Facebook is a huge step for the company in the UK. But mobile networks may not be quaking in their boots too much – to use VoIP on the move still requires a data connection, so users will be eating into their monthly data plans rather than minutes-allowance.

The feature isn’t yet available for Android, but we expect that to follow suit too, as it did in North America a couple of months after the iOS update.

We’re seeing a big push towards integrated VoIP features in a number of apps. You may remember that BlackBerry’s BBM 7 sheds its beta tags back in December, bringing the ability to let users make voice-calls directly from within the app. And Viber too is expected to launch voice-calling shortly.