Facebook on Monday announced the release of its native Share Dialog, which lets iOS developers add sharing capabilities from the social network to their app with just one line of code. The feature is now available in the Facebook SDK for iOS, which you can download directly from here.

The Share Dialog also improves upon the iOS 6 share sheet by adding support for publishing Open Graph actions. While app developers will certainly appreciate that adding the functionality only requires one line of code, the real advantage is for users. 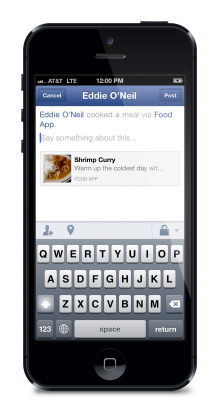 The Share Dialog means users can share activity from an app straight to Facebook without needing to login to the social network first. Facebook claims this eliminates one to three extra steps required for login when sharing via the feed dialog.

At the same time, it means Facebook users can tag friends, and overall use a better sharing dialog box from within apps. For users, Facebook says this translates into “a more meaningful and engaging” experience while for developers, the company says it means “even more people connect with your app.”

Ever since introducing the Share button, Facebook has been pushing it as a more expansive version of the Like button. It’s a smart move to keep Likes around while also offering Shares for those users who want to do more than just quickly show they appreciate a piece of content.

At the same time, because the Share button offers so many more options, it works great for spreading Facebook content with the potential of having it go viral. If you’re an app developer, you might want to be part of such an ecosystem, an idea which the company naturally wants to encourage.

In the grand scheme of things, this a small update to the Facebook SDK for iOS (this is version 3.5.1 while 3.5 arrived last month). Still, Facebook likely wants to break it out separately because the company hopes the dropped beta tag will spur some adoption from iOS app developers.