Facebook is bringing an update to its Android app that will let users set the cover feed as their default lock screen — all without having to download the company’s Home launcher. Also included with this release is a feature that enables the user to not only quickly unlock their phones, but also to access the camera and messages. 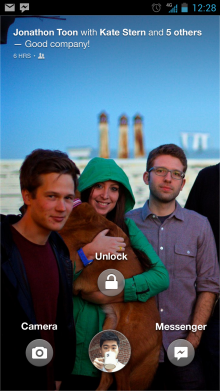 Additional devices have also been revealed to support Home. Starting today, the HTC One, the Nexus 4, and Samsung Galaxy S4 devices can have the platform installed, joining alongside the Samsung Galaxy S III, Samsung Galaxy Note II, HTC Note X, HTC One X+, and the HTC First.

This update is set to go live within the next few hours and Facebook says it will be “rolling it out slowly to users” over the next few days.

Cover feeds were introduced by Facebook back when CEO Mark Zuckerberg revealed Home. It’s very Flipboard-like in that users can see status updates from their friends within the full confines of the mobile device’s screen. However, while certain Home features crossed over to non-Home devices, cover feeds did not, well until now. Now, Android users don’t need to install Home to have this feature.