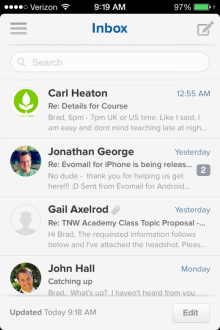 Back in May, we reported that Evomail for iPad was a slick and beautiful email client, before arriving for iPhones a month later. It finally hit Android in September.

Now, Evomail has lifted the lid on EvoCloud, a new backend for the service that replaces its standard server. With its own proprietary cloud-based system in place, the company says it’s now looking to do things “no one else can do”.

In real terms, it sets Evomail up to support Microsoft Exchange and iOS7 in the coming months, while it recently improved its push notifications too. Throw into the mix auto-saving to Dropbox and general speed improvements, then this should go some way towards helping Evomail gain critical mindshare in what is a busy space.

➤ Announcing EvoCloud: The Cloud Solution That Improves Everything at Evomail