In what looks like an effort to clean up how tweets appear in your timeline, Twitter for iOS and Android both actually embed tweets that have been linked in a tweet. 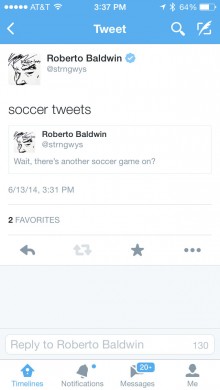 To embed a tweet in a tweet, just drop the link of the update’s URL in the tweet you’re composing. When the tweet goes live, instead of an ugly URL link, the linked tweet is displayed in its entirety.   Before we unleash a bevy of Inception-related jokes, we’re reached out to Twitter to see if this is a new feature or something they are testing. The social network regularly tests new features with select users.

This could be the company’s attempt at redesigning retweets. Instead of your followers seeing a tweet from a stranger or you having to manually retweet something by adding RT to it, you could link to a tweet while still throwing in your 140-character opinion about said tweet.

We have been unable to recreate this behavior via the web interface.

We’ll update this article when we hear back from the social network. In the meantime, do you have this feature available in the official Twitter app for iOS or Android?