Russia based Ecwid just announced the drop of its beta-tag after adorning it for slightly longer than a year.

Ecwid (short for E-Commerce WIDgets) allows storeowners to operate multiple storefronts from a single control-panel with the use of widgets and applications or plugins for different Content management systems.

A refreshing take on e-commerce

With Ecwid one can quickly setup a storefront on for example a WordPress blog, by inserting a piece of javascript code which pulls your storedata from Ecwid. Certainly a refreshing take on e-commerce; like other e-commerce systems your store data still remains bound to a single control-panel (Ecwid), but unlike Shopify or similar ‘storebuilders’ Ecwid liberates your data on the front-end side. In line with this strategy Russian founders Ruslan, Dmitry, Olga and Yuri have opted to support the OpenSocial platform. This effectively allows Ecwid to work on most of the social networks available.

During their onstage performance Ecwid has made three major announcements to justify their dropping of the beta-tag:

– They are finally opening up their API to developers
– The release of their Facebook application, making storefronts on Facebook possible
– Their introduction of paid premium plans

It will be interesting to see how and if Ecwid will change the e-commerce game coming year. At this pace, things are certainly looking promising. 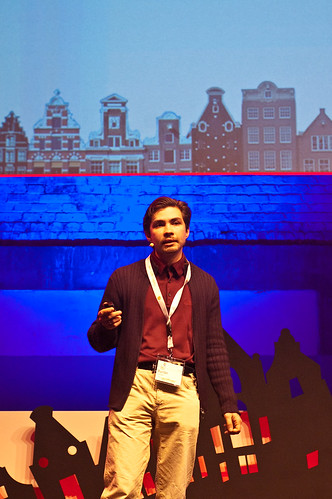