Oh Internet! So full of distraction, mashups and remixes of old familiar material for the lulz. But someone naturally has to create the clips we love to spread.

You may already be familiar with the group of producers known as Eclectic Method who not only take the films and TV shows we love into a new spectrum, but they manage to create some pounding tracks that are hard to sit still through at the same time.

Geoff Gamlen of Eclectic Method was showing off his video mixing skills at the Apple Store on Regent Street in London recently. He was using Algoriddim’s Vjay to mix clips and beats on the fly and it was a pretty impressive show.

We’ve looked at Algoriddim’s apps recently. The company is known for it’s Djay app which won the Apple Design award. It’s moved forward into dynamic video mixing which is pretty impressive to observe even if you don’t know your channels from your bpm.

Eclectic Method has spent the last ten years innovating around video remixing for live performance and lucky for them, the process is becoming a lot easier.

“When we were starting out, the technology was just emerging to allow digital video performances,” says Gamlen. “We were using laptops and modified video and DJ mixers; it wasn’t all that reliable. But this encouraged our style which was pretty reckless and improvised because we had to deal with the unexpected.”

As the technology improved, the group was able to approach new levels of performance on its world tours. “Within a few years some of the major manufacturers, Pioneer especially, developed ways of doing this that were dependable if expensive and heavy. But in the last couple of years we have seen some real leaps forward. Serato DJ software is popular for Mac and has included video plug-ins. that became a our new standard for performance.” 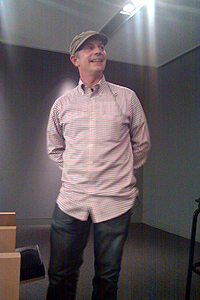 Vjay certainly seems to have captured Gamlen’s imagination. Bringing mixing technologies into a space not much bigger than a clipboard brings new challenges and possibilities.

“That’s a real game changer as it’s affordable and portable but it opens opportunities for multi channel performance,” he says. “It’s also rock solid. More so than some of the software we’ve been using up until now.”

The changes in technology that have led to the development of products like Vjay have also made the job much easier. “In terms of performance, compression has done a lot to improve video performance on software. We’re now looking at MP4 and H.264 compression which is great quality HD and yet the computer handles it very nicely,” notes Gamlen.

Eclectic Method shares video mixes online so that fans and other video mixers can watch and share the material. It’s pretty much par for the course in a digital environment where people prefer to spread new material through social channels.

“We tend to favour Vimeo and YouTube to present our mixes and we use Soundcloud when we occasionally export the audio. We don’t tend to present video mixes as audio alone though as it doesn’t make as much sense,” explains Gamlen. “It’s been our mantra, you’ve got to be able to see what you’re hearing when you’re working with music and TV clips.”

Putting material out freely on shareable spaces like YouTube and Vimeo might have been cause for concern not so long ago when record labels were more protective of their artistes’ work and copyright monitoring and channels like Vevo were yet to grace our Web pages.

The freedom to mix and share is one of the reasons that Eclectic Method has chosen to control its own material. “We’ve always remained fiercely independent. Back at the start of our career copyright was a controversial issue. We released a lot of material we didn’t own and we were feeling quite courageous about it at the time. It turned out for the good in the end as a lot of the owners of that copyright material came to us and employed us and were pleased to see us re-contextualise their material, giving it a new lease of life.”

Creating a remix can still be a bit of a dicey process when it comes to permissions for use and the problem is still something that is fought over from video take downs on YouTube to entire file sharing sites being blocked in different countries.

Gamlen says that there has been little improvement for artistes, “Copyright is still a grey area, and a certain amount of caution is still needed where there is money being made. Most of our infringing material has not been a money-making exercise, it’s been about entertainment and profile raising and we have not profited from it. But it’s still an area that is being figured out and we don’t seem to be much closer to resolution.”

So where do you start with the process of making a catchy mix that includes speech patterns and TV clips you can dance to? A background in music certainly seems to help and Gamlen says that although Eclectic Method is made up of music producers, video mixing was initially a challenge.

“We had a lot to learn, it wasn’t an easy task to learn the art of video editing in the early days. it’s a baffling maze of codecs. We were lucky to come across Sony Vegas software where you could set a tempo and the time line would divide into beats and measures, there was not a lot of that about at the time. It meant that you could nicely construct rhythmic sequences that work over modern dance music.”

The music is one thing, but remembering where you heard that clip, in that movie, that time, probably years ago? “Subzin is our first port of call if we have a themed mix as it goes through all of the subtitled files and can give you a time-coded reference point for whatever your search string is,” says Gamlen. “Before that we had to have a pretty encyclopaedic knowledge of what we were doing. It’s really about making music with what we find and so you work with what you’ve got. If you’ve got a reasonably well stocked library of clips you can start there and fill it out as you go along.”

Part of the magic in an Eclectic Method mix is the way a well-known quote or phrase can become a beat to dance to. Speech patterns and storytelling are both tricky skills to include, but they do help a mix make more sense.

“We listen out for grooves in sound effects,” Gamlen explains. “The speech and narrative side of it is more sophisticated because you have to preserve some sense of meaning to speech. In the early days we were looking for sound effects like gunfire, fighting scenes and drawn-out sound effects like sirens. We’re heading more into a narrative direction now. The Bill Murray remix is a good example of the narrative style, taking a subject and trying to give some meaning to it.”

Every day’s a school day

When working with an evolving technology, any artiste has to continually brush up on new skills and ways of creating and presenting their work. This is something that appeals to Gamlen as the group works toward further innovation.

“I love the learning process,” he says. “I feel that every time I learn, I am moving forwards. We’re very excited about multichannel video and projection mapping for live performance. We want to create dialogues which involve separate display screens and a very dynamic visual experience for people to enjoy.”

The latest ideas on how a video remixer can work are helping Gamlen and the group explore new possibilities and of course do a bit of showing off and sharing. At the very least it means fewer boxes of delicate and expensive kit to drag from venue to venue each time there is a gig to set up.

So how does this group work with Vjay? Check out the video below where “Eclectic Method Takes it in the APP”