Continuing our series of interviews with team members of the original Macintosh project, we spoke with Daniel Kottke, one of the first Apple employees, and Randy Wigginton, the creator of the MacWrite software, about bed-side computing, traveling to India with Steve Jobs, and tailoring the first Mac for users.

TNW: What was the energy like working on the original Mac team?

Daniel: Well, there was a huge change when Steve Jobs took the project over. Under Jef [Raskin], it was an unfunded research project with lofty, unrealistic goals. It was not a product, it was a project. It was research.

Then Steve Jobs turned his targets toward something else after he got disillusioned with the Lisa.

Randy: Well, actually, he got kicked off Lisa.

Daniel: Jef put it more kindly than that…

You know, the original goal was under $1,000 for a bit-mapped, very general purpose consumer appliance computer that wouldn’t need a manual.

Daniel: Originally we were supposed to launch in 1982…what was the first target price?

Randy: It was probably like $1,300 or $1,400. We could never have launched back then. We didn’t even know what the product was. We theoretically could have launched in 1983, but those kept getting pushed out as well.

Randy: Was that the final board?

Daniel: No, it was the first build. 50 is a lot though, you call that pilot production, that’s not a prototype. It’s expensive.

TNW: Did you guys set out to change the world? Was that a stated goal that you felt as you were working?

Randy: I don’t know that it was specifically to change the world, but it was certainly to show people how it should be done, how computers should be.

Daniel: Oh yeah, Steve Jobs reminded everybody. Well, what I remember is Steve Jobs reiterating many times, “This is a billion dollar project, we’re going to sell a million Macintoshes.” He said that over and over.

Randy: Steve did things like that all the time.

Daniel: Well, it definitely got us motivated.

I would say with respect to changing the world, the story goes back to [Douglas Engelbart’s] The Mother of All demos in 1968, the launch of the windows and mouse interfaces, which turned into the [Xerox] Alto, and then the Star, and then the Lisa, and then the Mac. That’s the lineage.

Randy: Until the Mac came along, it was all just sort of very theoretical, very out of reach of people to use. Even the Alto and the Star were actually very difficult to use. The Lisa was almost impossible to use.

Daniel: Really you thought so?

Randy: Yes. Lisa was big, it was slow. It was priced out of the range of most people. Those were the things that we wanted to fix with the Mac, which was bring it down so that it really was “computing for the rest of us.” That’s the way Steve really did see it. He wanted something our mothers could use without bothering us on the phone all the time. That was the goal.

Steve wanted something our mothers could use without bothering us on the phone all the time.

TNW: When you look at today’s Macs, as well as the iPhone and the iPad, do you see how it traces back to that original genesis?

Randy: It was more of a philosophy – let’s bring the theoretical into now – and the focus was on the user, not on the programmer. Before then it had always been let’s make it so programmers can do stuff and produce programs.

Here, it was all about the user, and the programmers had to work their asses off to make it easy for the user to do what they wanted. It was the principle of least surprise. We never wanted [the Macintosh] to do something that people were shocked at. These are things that we just take for granted now. The whole undo paradigm? It didn’t exist before that.

Like Daniel says, it’s definitely the case that there were academic and business places with similar technology, but they had never attempted to reach a mass market.

Daniel: I’m just struck by the parallel now, thinking about what the Mac did. The paradigm before the Mac in terms of Apple products was command-line commands in the Apple II and the Apple III. In the open source world of Linux, I’m messing around with Raspberry Pis now, and it terrifies  me, because I think, “This is not ready for the consumer,” but then I think about Android, which is built on top of Linux. So the Macintosh did for the Apple II paradigm what Android has done for Linux.

The Macintosh did for the Apple II paradigm what Android has done for Linux.

We’re in a whole different world now in the sense that the majority of computing is shifting over to mobile. Of course, desktop machines won’t go away for people who are writing, for instance, but we’re kind of in the touchscreen/swipe era now.

We’re on the threshold of an era where people are acknowledging that it’s not so important to memorize anything because you can ask Siri any question and you’ll get your answer. When I think about this, it’s like the 30th anniversary of the Mac is as it’s passing into history.

Randy: Steve wanted to move computing into the living room. That is what is still continuing to happen these days.

Daniel: Randy, were you there at the Pajaro Dunes retreat where the concept that went up on the board was, “We’re going to make a computer that you’ll take to bed with you.”

Randy: Yeah. It’s here. Look at the number of people who check their email on their phone first thing, they don’t even get out of bed. It’s a huge percentage.

Daniel: Yeah, reading on a tablet in bed is very, very popular.

It’s like the 30th anniversary of the Mac is as it’s passing into history.

TNW: Randy, what was it like working on MacWrite? Conceptually, were you doing stuff that had to be pioneered?

Randy: The whole goal behind MacPaint and MacWrite was to create applications that were useful, but also exemplified everything that we wanted other applications to do, such as undo. No matter what you did, we wanted undo to work.

The first time we did it in MacWrite, it was very hard because how text flows from line to line is actually complicated. There are a number of edge cases around it. So we were doing a lot of things that just hadn’t been thought of.

We would do stuff and then [the software] would get slow again, so then we’d have to go speed it up again.

It was definitely very challenging trying to figure out how to do something as close to perfect as we could and make the deadlines. We were working with tools which are effectively like a chisel and a rock by today’s standards – putting it directly into assembly language. 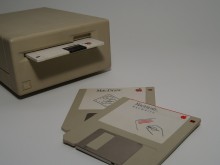 Daniel: Was there even a manual for MacWrite/MacPaint?

Randy: There was, but I don’t know that anybody ever read them. They were very small.

Daniel: It’s ironic that the Mac project was started by Jef Raskin when he was head of publications. His job depended on writing manuals, and yet he started this project to do away with the manual.

TNW: Daniel, you traveled around India with Steve Jobs in the 1970s prior to Apple’s founding. What was that like?

Daniel: It was anti-technology, we were monk. We did not even have cameras. I regret that I didn’t even keep a trip log. I don’t even know what we did from day to day.

The trip came about because my friendship with Steve grew over our mutual interest in Eastern literature and we had read a couple dozen books and wanted to see what was up with the holy men of India.

In particular, Neem Karoli Baba. He was the focus of [Ram Dass’s] “Be Here Now.” That was the book that sparked my friendship with Steve. Neem Karoli Baba had just passed away but he had a very large group of followers, so we wanted to go and have a look. Well, we got there and surprisingly there was nothing, everybody had left.

Steve has commented that he was disillusioned by the trip. I didn’t say that. Travel is very broadening and a very good experience. Especially when you’re young and you don’t have a clear career direction. But, with respect to finding a holy man that was going to do miracles and read our minds, no we didn’t find that at all.

Steve was a funny guy because he had so many interests, but he was kind of secretive about his thoughts. He was like a guy holding his playing cards close to his chest.

He never ever talked about technology with me, never talked about the [telephone hacking] blue boxes he had been selling just the year before. I was astounded to find out about the blue boxes years later. There’s a part of Steve where if you’re not contributing to what interests him, he’s just not even going to ever bring it up.

For that part of history, by the way, there’s a great book that just came out called Exploding the Phone.

What Steve has said is if it wasn’t for the blue box and his history of working with Steve Wozniak, Apple would never have happened. It was the partnership between Woz and Jobs of making and selling the blue boxes. Then several years later when Woz created his Apple I prototype, you can kind of imagine how Steve [Jobs] said, “Well, okay let’s make a bunch of boards and sell them.”

Originally, it was not supposed to be a computer, it was just a hobby board for their friends at the Homebrew Computer Club.

TNW: Last question. You both are participating in a public team reunion in Cupertino, CA for the Mac’s 30th anniversary on Saturday. What’s planned for the event?

Daniel: For so many of us, [the Macintosh project] was such a pivotal, memorable part of our lives, everybody loves these Apple reunions. Well at least I do, a lot of us do.

I helped [former Encore Systems CEO Gabe Franklin] get his prototype Twiggy Mac running last summer. He had this idea of doing a little get-together at the Computer History Museum just to kind of celebrate that. Amazingly, just, on two or three days notice, we got a whole bunch of people to show up.

The enthusiasm about that little reunion led him to start thinking about the upcoming 30th anniversary. He’s got a 3 1/2-hour program of lots of video clips from the launch 30 years ago. We’ve also got three or four panels with a lot of the original team members.

Gabe’s vision was that it’s a recognition for all of the unsung team members. The Mac team at time of launch was 120 people. There was a lot of press coverage for the small group of 6 or 8 core people, but not much for the other 100. So what Gabe is doing is he’s producing a lifetime achievement award for every member of the team.

If you’re interested in attending the reunion on Saturday, you might be able to pick up last-minute tickets from Ticketmaster.

This interview has been edited and condensed for clarity