This article was published on October 3, 2012

The Dublin Web Summit is almost upon us and some of the finest startups and tech companies will be giving talks, taking part in discussions and of course networking like there’s no tomorrow.

The event is a highlight on the international tech calendar and this year is set to be bigger than ever with more than three thousand attendees already signed up.

One of the many well-known brands headed to Dublin is Mind Candy’s Moshi Monsters, the social gaming network for kids that lets them create monsters and develop environments to keep them in while learning early computer skills along the way.

CEO Michael Acton Smith will be speaking at the Dublin Web Summit and it’s a prospect that he’s looking forward to for personal reasons as well as business. “I spent many Summer’s growing up in Galway because my mother is Irish,” he says. “I love the country and am excited to be coming back. Ireland is about the fifth most popular country in the world for Moshi Monsters players.”

Acton Smith created Mind Candy to explore online games after founding Firebox, the Web store for unusual, fun and geeky gift items. It’s not surprising that he has continued his pursuit of fun through both businesses, but naturally a single focus is more productive. “I love toys, games and gadgets,” he says. “So I try and stay involved but most of my time is spent on Mind Candy these days.”

Doubtless learning from a successful retail site, Acton Smith and the Mind Candy team have taken Moshi Monsters beyond the realms of online gaming and into many brand spin offs including toys, posters, accessories, a magazine and even an album on its own record label.

The brand has been spread in many different ways but Acton Smith says that he is not yet done with exploring. “We’re going to continue developing the brand on new platforms as long as we feel it is adding to the story or our character development,” he explains.

There is still room to move as any form of media can be transported so long as there is a good story to tell. Acton Smith has his eye on both small screens and large. “Mobile is a hugely exciting area,” he notes rather cryptically. “We’ve also got our first film out next year.”

Mind Candy is taking firm steps into the world of TV and film. Earlier this year the company took on Former MTV Networks International chairman Bill Roedy as a non-executive director to help pave the way.

Today the Moshi Monsters has over 60 million registered users and in 2011 created a revenue of $50 million with $17 million net profit.

More to business than IPO

As a successful and expanding startup in the UK, Acton Smith is frequently asked about the possibility of floating his business on the stock market. Last month he took part in an event led by Minister of State for Universities and Science, David Willetts, who outlined a relaxation of IPO rules for high growth companies on the London stock exchange. 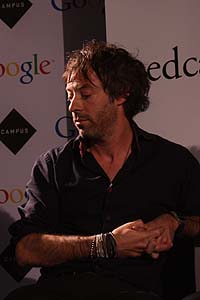 At the event, Acton Smith said that he is not currently planning to float. “We get asked a lot by journalists and the public. We’re not going public. A lot of people see it as the big thing to aim for and to us it’s just a step on the journey. As things stand now we don’t want to sell the business, I want to build this business for many, many years and I think more entrepreneurs should think like that instead of selling out as soon as America or China come knocking.

“What we’re doing now is getting our heads down and building the best business we can and when the time is right we’d love to go public. But I wouldn’t have considered London, like a lot of European entrepreneurs NASDAQ and NYC would be top of the list. But all other things being equal I would prefer to float here. We’re a British company and very proud of building a company here. The government announcement is a step in the right direction, but it’s not a silver bullet, there’s a lot of things that need to happen.”

Acton Smith also feels that there is not the same sort of pressure on UK tech companies to head to market as many businesses are successful in their own right without the need for shares. “There’s much less pressure than there once was for fast growing businesses. Many of the current batch of tech startups are super profitable so they don’t need to float to raise financing for expansion,” he says.

The man of Moshi Monsters plans to share some of the lessons he’s learned building Mind Candy over the years and so it will no doubt be a talk that budding entrepreneurs and seasoned professionals will not want to miss.

For himself, Acton Smith is looking forward to learning a few things at the event himself, “I hope to gain insight from great speeches and making new friends at the parties,” he says.

All the more reason to consider getting over to Eire over October 17 and 18 to explore the world of the Web through some of the world’s current thinkers and business leaders.