Disney Interactive has launched its newest game title specifically for mobile devices. Called ScribbleMix, the concept is that two players will compete with each other in a Pictionary-style contest where one person draws the clue and the opponent must guess it based on a series of words.

This is the company’s inaugural mobile-first game and it is being released for iOS and Android devices today with a Windows 8 version coming soon.

Akin to Zynga’s Draw Something, ScribbleMix is a game based on drawing, however, the app wants to put more emphasis on the doodle or, simply put, a scribble. Everyone remembers the time when they were using a piece of paper and crayons or markers to “draw” something. It never really came out to be the next Van Gough painting or worthy of opening up a gallery — the point was to have fun and use your imagination. 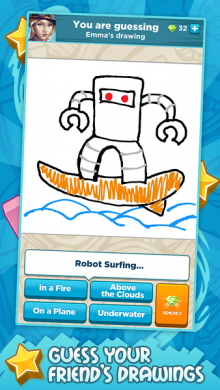 ScribbleMix isn’t just an ordinary competitive game. Yes, you are trying to outsmart your opponent, but you also have to work together in order to advance in the game.

Each pairing will be set on a map and given a challenge to fulfill, a la Pictionary. As the teams advance, the challenges will increase in difficulty. The idea is to get as many stars as possible — the more correct the guesser is to what’s being drawn, the more stars the team will receive.

At the beginning of each level, the drawer is given a phrase, similar to the game show Win, Lose, or Draw. They can “re-spin” to choose a new phrase, but it will cost them tokens that they’ve accrued throughout their game play. The drawer will scribble out the phrase and then submit it to be replayed back to their opponent, the guesser. ScribbleMix will provide the guesser with a set of nouns, verbs, and adjectives — each choice will assemble the phrase.

Players can have matches with other players similar to gameplay with Words with Friends. 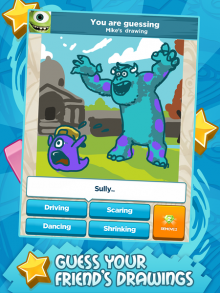 Since this is a Disney game, ScribbleMix also incorporates premium features from some of its top product lines. To coincide with the upcoming release of Monsters University, this mobile game gives players the option of leveraging phrases and characters from the movie. If implemented, gamers will have a reference on hand to remind them on how to draw characters like Mike Wazowski, James P. Sullivan, and Randall Boggs.

We had a chance to receive a demo of ScribbleMix and it was pretty entertaining. Sure, you become self-conscious about drawing because well, let’s put it this way, we’re all trying to not be embarrassed by our bad drawing skills (me especially). But the idea is to have fun with the drawings and collect not only gold stars but gems, which can be used to receive more color packs and content.

ScribbleMix has integrated itself with Facebook to make it easier for gamers to find which one of their friends to play with. Unfortunately, if you’re thinking about playing this on a Web browser, think again as there are no immediate plans to bring it to Facebook like King’s “Candy Crush Saga”. 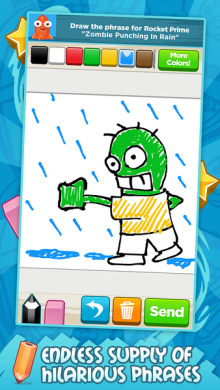 Once installed, players will have three game packs available to them, including ones on pop culture and other interesting themes. In addition, Monsters University will be available, but only for a limited time. Once it has been removed, only those that have installed it will keep it. Eventually with big name movies and TV shows, Disney says it could release more premium packs — will we see a Star Wars theme pack next?

The release of ScribbleMix is Disney’s first mobile-exclusive game. Created by the team from Playdom, which Disney acquired back in 2010 for $763.2 million, this game is a deviation in the company’s normal development process. Previously, all of its games have been built for Facebook first and then moved to the mobile space, but ScribbleMix reverses that trend.

The title is being released at a particularly interesting time, since Zynga — a competitor to Disney Playdom, made drastic cuts this past week, resulting in the termination of 18 percent of its workforce and shuttering of several offices. A casualty of this process was OMGPOP, which Zynga acquired in March 2012 for $200 million. OMGPOP is the company behind the once popular game Draw Something.

Players can download ScribbleMix starting today for free from both the Apple and Google Play app stores. The free version comes with ads, but with a one-time fee of $0.99, those can all go away.