The screening for “Disconnect” was running a few minutes late. Despite the fact that we knew that the movie’s tagline was to “look up” from our screens, most of the other attendees and I still ducked our heads into our phones while we waited.

Behind me, an aspiring writer was talking about how his blog’s Facebook page was hovering at 392 followers. iPhones buzzed as Whatsapps, Kiks and iMessages came in.

The room was quiet after the screening finished. A couple phones lit up, but most people walked out in silence, with a few of us in tears. 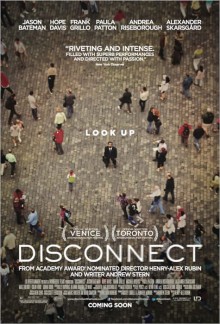 Disconnect, which arrives in US theaters today (Friday), is a sort of “Crash” for social media in that it weaves several interconnected stories. In the process, the film manages to hit on several hot-button technology topics: catfishing, online child pornography, identity theft, spear phishing, social media addictions and cyber-bullying to name a few.

The movie’s storylines follow a family dealing with the aftermath of cyber-bullying, a husband and wife trying to get their money back after sharing too much online, the relationship between a cybercrime detective and his song, and a journalist who gets too close to a source while investigating an online child pornography ring.

The YouTube trailer for Disconnect describes it as a “dramatic thriller”, but that’s a typical marketing ploy that misrepresents the movie. It’s actually paced quite slowly, even going so far as to play out some scenes with people having typing out conversations over chat.

That being said, I don’t mean for my objection to Disconnect’s classification as a thriller to be negative. Watching the characters type does make the movie drag at times, but over-stimulation is a symptom of our “always on” lives, so it’s nice that the movie takes the time to explore the characters’ relationships rather than simply drumming up 90 minute’s worth of tension to troll the box office.

For personal reasons, Disconnect was emotionally powerful, but I suspect that many of you have your own experiences that the film’s narrative would also call to mind. Facebook didn’t exist when I was in high school 15 years ago, but back then, I still lost myself in IRC chatrooms and drove myself to despair when relationships real and imagined didn’t work out the way I hoped.

Advances that have been made to online communications make it easier than ever to get in touch with people around the world, but today’s generation also faces dangerous threat that in spite, or even because, of this new social Web with all its virtual “friends” and “followers” we may actually ended up disconnected and alone.

Interestingly, Bateman revealed in recent interview with Hollywood Reporter that he can relate to the character he played in that he always has the “newest and greatest from Apple”.

I appreciate that Disconnect doesn’t stray too much into being preachy. It doesn’t stop to tell us how you should spend your time online, it doesn’t criticize us for being addicted to being our gadgets.

In fact, one of the minor criticisms that I have with the movie is that it’s too soft with the conclusions of some of its story lines. I’m strongly anti-spoiler, so I won’t go into details, but I felt that the consequences for some of the characters’ actions in the ended up falling short of believable reality. The film runs up to the edge, and then backs down to its detriment

For the most part, I found the depictions of technology in Disconnect realistic. A range of brands appear in the movie, though it’s weighted heavily toward Apple devices. I did find it odd, however, that a character pounded on the keyboard when the person they were chatting with on Facebook signed offline. I guess he could have been hitting the refresh button, but that’s really the only thing that stuck out at me.

Disconnect turns out to be a reasonable line in the ongoing debate about the effects that technology is having on our society. It’s a discussion that we’ll need to keep having. The Yeah Yeah Yeah’s recently spoke out against the use of smartphones at their shows. I can certainly understand the sentiment, but it’s all too easy to vacillate between Neo-Luddism and unquestioning technoworship. Technology is no more than a tool, and it’s up to the collective us to figure it out how to use it without destroying ourselves and our relationships.

If you think you could use the reminder to occasionally turn your devices off and go out and connect with the real world, this is a movie worth seeing. Just don’t forget to put your phone on silent while you’re watching.

See also: Disconnect: A New Movie Sounds The Alarm About Our Hyper-Connected Lives