The argument that startups can thrive all over the UK, not just London, has been given a boost with the news over the weekend that Path-like private sharing app aimed at couples, Cupple has been acquired by similar Silicon Valley-based firm Pair (which is rebranding itself as Couple).

Given the noise that the UK government makes about the Tech City initiative in east London, you could be forgiven for thinking that there’s no point basing a startup anywhere else. In actual fact, communities of startups have been quietly getting on with success stories all over the country. One of the most notable cities to host a startup cluster is Newcastle in the north of England, where Cupple was born in 2011 within the walls of creative agency Darling Dash.

We first covered the app when it launched, describing it as “a nice way to text less and share more… if you’re looking for a way to share moments with your loved one while on the road, or from up the street on your way from home.” 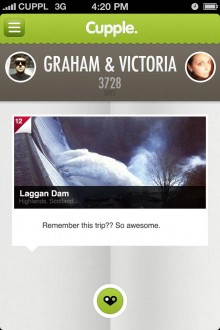 Since then, the team stayed in Newcastle, and co-founder and CEO, Tim Allison says that he’s glad he stayed and saw the company through there. “There are many times in the journey where you have those ups and down. Particularly when I was on a train a year ago and read that our competitors had raised $4.5 million (Allison is referring to Pair’s $4.2 million round last year).

“When you’re involved in a startup you get so many ‘nearly’ stories – you nearly raise funding, you nearly got this partnership… I had many of those experiences in my two years and I was intent on this not being a ‘nearly’ story,” says Allison. “I hope that it goes to show that with the attitude and the tenacity, a bit of luck and a good product, you can turn a ‘nearly’ story into a ‘we pulled this over the finish line, we’ve done it’.”

An early, but inspiring exit

In Silicon Valley, an early exit to a similarly-sized competitor wouldn’t necessarily be seen as a success, but in the north of England, stories like this can be really encouraging to the wider community. They show that you can have an exit you’re happy with while being based somewhere like Newcastle. The Cupple story will no doubt go on to be a case study for startups in the north of England.

So, why didn’t Allison head off to somewhere like London or the US? “I felt that there was enough going on (in Newcastle), and enough enthusiasm in what we were doing and what other startups were doing, for me to stay there and meet people and go to meet people and feel like I was part of a community. If that hadn’t have been there, I might have got on a train and gone to London but there was an emerging scene and people being quite vocal about the good stuff going on. I was absolutely comfortable being in Newcastle.”

Allison admits that when it comes to raising money, he feels that Silicon Valley or London are still the best places to be. Cupple raised a small private angel round in early 2012, but that was all that it needed to see the company through from inception to an exit that he’s very happy with.

Some will say that an early acquisition (especially from the US) is no good for the UK scene, and that sustainable, successful businesses are far better in the long run, but if the founders are happy and the story goes on to inspire others to push on with their own projects, it can only be a good thing.

Cupple as an app is no longer available, but Cupple’s founders now have a successful exit behind them and can go on to inspire the next generation. It’s not like Newcastle doesn’t have other startups like Screach for example, that have the opportunity to become large, international successes, and the more exits that clusters such as Newcastle can generate, the more likely investors will take notice and there will be no need to travel elsewhere.

Alison says that the Cupple team will continue to be involved with transitioning Cupple to the Pair/Couple team over the coming weeks. Beyond that, he has some ideas for the future, but first intends to release some music he’s been working on with friends. Before any of that, he plans to “disappear up a mountain for a week.”

He’ll probably have a lot of invitations to give inspirational talks at startup meetups across the north of England to contend with when he returns.