This article was published on December 11, 2012

This is becoming sad, really. Today the official blog of John McAfee posted a short update to the effect that Vice Magazine outed the fugitive so that it could record and, presumably, profit from his capture.

To gist the sentences for you would be a disservice. Here are the critical bits, written in the key of crazy [Formatting: TNW]:

Based on new information. Mr. McAfee is terminating his relationship with Vice Magazine.  Due to information just received, It is no longer clear to Mr. McAfee that the “accidental” release of his co-ordinates due to Vice Magazine’s editorial department’s failure to remove location data from their now notorious photo, was indeed an accident.

McAfee does admit that the two fine folks out with him in the field, as it were, did not know of the plot. Furthermore, “legal proceedings are under way.” Oh dear.

Why does TNW view this update as something in the realm of bunk? It’s not the fact that McAfee has used his blog to spread patent misinformation before – he has – but more that specific episode of the man-on-the-lamb escapade that we have been enduring is an every shifting story.

To wit, here is the first entry in the Saga of the Oops Photo:

Oops. Vice, an online magazine known for in-depth pieces on often salacious topics today bragged that it is with the embattled technologist John McAfee, keeping tabs with him during his time on the run. Their headline says it all: “We are with John McAfee, suckers.”

And here is round two of that tale:

However, in what may be an example of ex post factohistory shifting, McAfee is claiming that he in fact tampered the data, and then caused a false reason for the photo to be posted. We’re not kidding.

Here’s the man himself, on his own blog, in a post entitled “Another Apology:”

“I openly apologize to Vice Magazine for manipulating their recently published photo.  I have been ferocioously [sic] put my place by Mr. Rocco for “interfering” with the objectivity of their reporting.  I, for my own safety, manipulated the xif data on the image taken from my cellphone, and created a fake emrgency [sic] so that the urgency of movement led, as I knew it would, to the hasty posting on their website.  I felt that our tenuous situation demanded action, and that was the action that I chose.

I do not believe that Vice will remain with me further.  Again, my apologies.”

Thus, Vice publishes the picture, we nail the coordinates, McAfee then invents the tale that he changed the data to throw folks off the scent. Thus, he wasn’t actually in Guatemala, was he? He was, he later admitted:

It was only yesterday that we reported that man-on-the-run fugitive John McAfee was claiming to have falsified the metadata of a photo that placed him in Guatemala.

Well, it seems he IS in fact in Guatemala after all, after exiting Belize with the aid of “many supporters. He says:

“I apologize for all of the misdirections over the past few days.  It was not easy to exit Belize and required many supporters in many countries.  I am in Guatemala and will be meeting with Guatemalan officials this morning.  If all goes well I will do a press conference tomorrow.”

So the accidentially hot photo was a fake that was real that was denied and then confirmed. Whatever.

McAfee is behind bars and is in a spot of trouble, as his petition for asylum was turned down. Lashing out against Vice smacks of desperation and the desire of another media cycle. 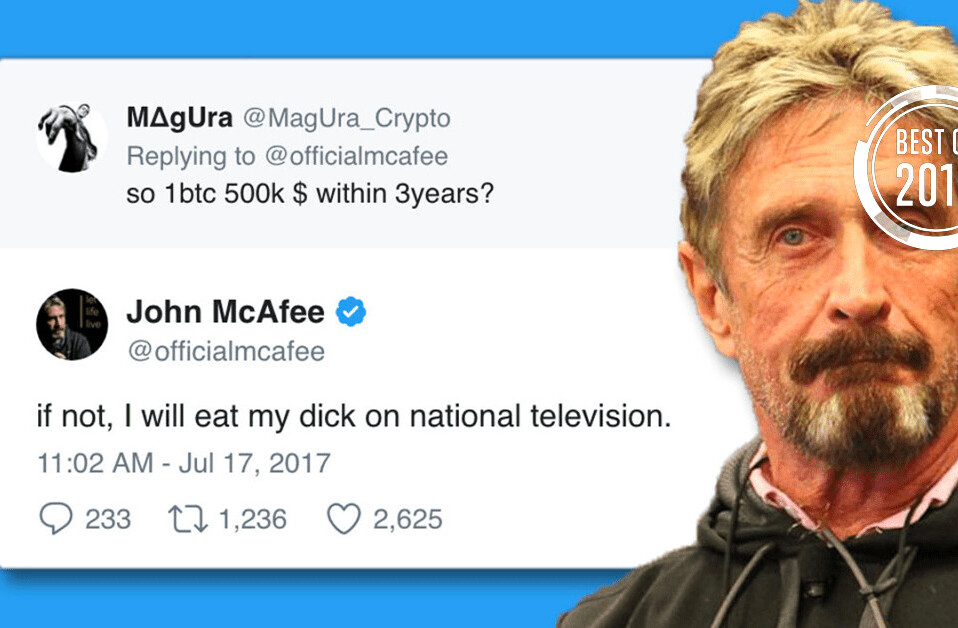