The Israel Mobile Summit took place last week in Israel, showcasing some of the new apps Made By Israelis. Traditionally, Israel hasn’t had a lot of success with consumer facing products – but it looks like we’re seeing a change in that luck under way.

Entrepreneur and investor Eden Shochat, explains “… Israel is in its 2nd golden age. Applications have become the primary means of interfacing with consumers. When coupled with big-data and machine learning, which have always been the secret sauce of Israel, applications like Waze, Any.DO & JoyTunes provide a unique value to consumers.”

JoyTunes took first place,  Glide took second, and Vubooo won third. My commentary on them, and a few others who were in the running, is below. Go get some coffee and come back, this is gonna be a long one. It even includes a rant <fun!>.

I’ll admit it, I totally didn’t understand why Israel has so many blessed “learn how to play an instrument” apps out (JoyTunes, Instru-magic, Jamstar, Tonara and Jammmz – and there are more coming. The list on my FB wall just didn’t stop when I asked this question.)

Israel doesn’t even produce dozens of world-famous musicians, why are we suddenly obsessed with music-learning? I asked Yuval Kaminka, the CEO of JoyTunes, why a learn-to-play-music app? He explained, “…the music education market is $10 billion a year,” and “… JoyTunes intends to be the Rosetta Stone of music education.” That’s a seriously nice size market that technology hasn’t tapped yet. Couple that with Israel’s history with hard-core technology and it sounds like the perfect combination for a massive win.

JoyTunes is making a few products, which can be downloaded for free. What makes it special is its engine, which recognizes sounds from both acoustic and electronic instruments. In the case of its piano app, that would be recognizing the difference between an electronic keyboard (e.g., an organ or Moog) or a regular acoustic one. This isn’t a “keyboard on an iPad” app, which in my opinion teaches no child anything, and I can say that with some confidence as I have two sons learning music right now.

JoyTunes has over 1.5 million people using its platform, with 1 million songs learned weekly. It monetizes through in-app purchases, but gives a few away for free to start, and expects to break even and start profitability by the end of this year.

This one is interesting. Glide is a social video network where you can watch your friend’s video messages live or later. Everything is saved to the cloud, so you don’t have to worry about it taking up space on your phone, and you can respond whenever you want. The video for it (below) explains it far better than I can.

It’s being downloaded in droves – with the company claiming over 200,000 downloads in the past week alone. I’ve had Glide on my phone for months now and I don’t think I’ve sent a single message. But to be fair, I hate seeing myself on video, so I avoided it.

I’ve been debating with myself on mentioning the fact that the three founders are new immigrants, and Orthodox Jews of the black kippa variety, who are from Jerusalem. Why should it matter? Who really cares? Well, it does happen, but it doesn’t happen all that often.

I did an admittedly extremely informal and unscientific survey on my Facebook wall and the only other company worth mentioning was Eden Shield. The black kippa Orthodox founder thing sticks out even more than a female founder in Israel. So much so that numerous people brought it up to me at the conference – so yeah, I figure it deserves a mention. Why? Well, for one because nothing in Glide’s marketing even hints at the founders deep religious beliefs (see video above). The three founders would never give a woman not married or related to them to them a kiss on the cheek, as the couple does in the marketing video for Glide. I wondered about how their community handles that, and if they received any grief for it.

I asked Jonathan Caras, the CTO of Glide about the possible conflict in the way they market and the way they live, and he had this to say, “Our product is not marketed to the Chassidic community. We have a way of life that works for us, but we also recognize and respect that most of our users have not made the same lifestyle choices we have.

“A good way to think about it is that I would not be comfortable eating a cheeseburger, but would sell them to people that do eat cheese burgers. Obviously this is an oversimplification of the issue, but what it boils down to at the end of the day is respect and understanding.”

Jonathan asked that I add, “… all 3 founders are baal tshuva, meaning we chose to take on an Orthodox lifestyle as adults.” 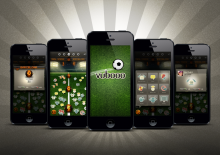 Soccer fans – this is for you. I’m only interested in watching surfing or skateboarding, so Vubooo isn’t for me, which made interviewing Itav Topaz, the CEO of Vubooo highly amusing. I’ll fully admit to giving the poor guy a hard time about having a sports app for 2nd screen, since I don’t watch TV and well, I’m not all that interested in soccer, “… ever since they made the shorts longer, I’ve had no reason to watch the game.” Yes, I really said that.

Vubooo is an app with a silly name – and it’s all about the second screen. In fact, it intends to be THE second screen, offering sports fans a ‘virtual stadium’ where people can “cheer, shout, show their support and share their experience with others around the globe, LIVE during match time.” And it’s doing well in achieving its goal, with a #1 ranking in Google Play for second screen sports apps.

It just makes me think of Mystery Science Theater 3000 for sports. On mobile. Where anyone you know can comment. But there are no mad scientists. Ok, maybe it’s nothing like MST 3000 and I just wanted to pull in the reference.

If people are sitting there commenting on their devices, who’s left to scream at the TV?

Other companies worthy of note:

HeyStack originally launched with much fanfare and won Techono.me last October. I was really looking forward to its launch because:

I was supposed to write about HeyStack back then since they won Techono.me. But I didn’t. In fact, I pointedly didn’t.

HeyStack didn’t actually launch, and I flat-out refused to write about them until they had an app in an Apple App Store that wasn’t Israel. What would be the blessed point of writing about an app that most people reading about in TNW could actually get access to? I have zero desire to frustrate readers. So I waited. And waited. And I nagged.

Then LeWeb happened in mid-December. Haystack was created during 96 hours on the Founderbus from Berlin to Paris. Same premise, almost identical name. It won the chance to pitch onstage at LeWeb. That was when the Twitterverse, from Berlin and Paris to Tel Aviv exploded.

DISGRACE! A company that just launched at #Leweb COMPLETELY ripped off heystack.co INCLUDING the name!! http://t.co/FnusohW4 cc @loic

(It turned out to be One Hell of a Coincidence – proving that no idea is comes in a vacuum. If you have a great idea, most likely someone else in Singapore, Tel Aviv, Berlin, New York and yes – even San Francisco could be having the very same idea. It’s the implementation that matters.) Had HeyStack launched on time – this probably wouldn’t have happened. By the way, Haystack also hasn’t launched yet according to its website. There seems to be an epidemic with this sort of app.

And Heystack (the Israeli version) still didn’t launch. So I waited some more.

Shai added me to the beta, which was an app with a slightly different premise – it showed statistics on how likely you were to have a good match with people you know or have loose connections with on Facebook (your friends of friends.) That was fun to look through, if only to see which one of my friends the app predicted would be a good match. (For the record, I’m happily married and not looking.) Today’s app only seems to show the loose connections (I just scrolled through to get an in-app pic and not a single friend came up from the list. Hence no in-app photos in this post.)

It still hasn’t launched worldwide. Which is a shame, because the premise is brilliant. Seriously, Shai and his team have thought of everything. If you’re a single woman – this is a dating platform you can trust. No more dating spam by guys you couldn’t be less interested in if you tried. Guys can only contact you if you approve them first.

The website states that Heystack will be launching in the UK & Germany this month, so here’s the deal – if you live in either place or you know someone who does – go spam Shai on Facebook. Remind him that a great app isn’t worth much if NO ONE HAS ACCESS TO IT. Let’s help encourage him to actually launch the blessed thing. Your single friends will thank you.

A lean-back music experience for those who have faith in the power of the people and a learning engine to be their radio station. I admittedly prefer a more lean-forward approach. The first hour of my feed keeps changing as I add more songs I like listening to at the gym – then I play the app on my own station while I’m working out – and I rarely listen to the main radio side of it.

However, if it’s radio that you’re looking for – Serendip studies your preferences and finds you matches. Anyone sharing music publicly using YouTube, Vimeo, DailyMotion, Soundcloud, and Bandcamp is a potential DJ. Consider this your serendipitous musical discovery engine.

Serendip has been around since August 2012, but the app only came out in late-January 2013, which is how it was eligible for the app startup competition. Music is a bitch of a market that it’s hard to make money in, and Serendip is currently aimed at growth. Let’s help support it, shall we?

It’s a great music discovery tool that actually works. I should also mention – the artist radio stations kick Spotify’s version hands down. Seriously. I’ve tried both and the music served by Serendip are actually of my taste. When I listen to the Spotify artist radio stations I’m left there wondering what sort of connection is there from the artist I picked and the one I’m listening to. That in itself is a reason to go give Serendip a try.