There’s no shortage of travel apps for those who like to get out and about – there are peer recommendation apps such as TripAdvisor, country guide apps from experts like Lonely Planet, and for those averse to public transport, there’s the likes of Hailo which lets you beckon a black cab with a few swipes on your smartphone.

Now an aptly titled app called Commuter has hit Apple’s App Store, bringing all the various transport options together into one application, including national rail, underground, overground and DLR. Though strangely, bus options have been omitted.

When Transport for London (TfL) announced back in 2010 that it was opening its bus and London Underground data for developers to access, a steady stream of apps began to emerge from the developer underworld, as we’ve seen already. And last year, we reported on the UK government’s plans to embark on a big ‘open data’ push for travel (and healthcare), with a promise that by spring this year, data will be released relating to all 350,000 bus stops across the UK, with the Department for Transport (DfT) working with Traveline to release the ‘Next Buses API’.

DfT is working alongside Network Rail and the broader transport industry to make real-time running data available, and it will be released for free. This should open the floodgates for road and rail apps across the entire country, and we can expect to see many more travel related apps come to the fore throughout this year.

What Commuter is trying to do is centralize your transport information within a single app, and it does do a decent job of it, though it is mostly London centric.

The app itself is free for live London Underground and LDR data, as well as scheduled times for UK rail and London Overground services. To tap real-time data for the latter two, you will have to sign-up to a data plan, which will set you back £0.69 for one month, £2.99 for six months or £4.99 for twelve months.

You can search by location, what’s nearby, recently used stations, London postcode, and A-Z station list. You can even ‘favorite’ your routes, and assign names to specific stations, such as ‘work’ or ‘football’. Oh, and there is a handy ‘Service Update’ feature for London Underground, which lets you see at a glance which lines are currently offering a good service, and which are experiencing delays.

For the most part, Commuter is really well put together, but the omission of bus data is a strange move for sure, and I would expect this to be included in a later incarnation of the app. Also, yes…it does cover national rail information, but it would also benefit from regional or local data covering other cities. As it stands, travelers will still have to rely on more than one app if they want to cover all bases – both in London and across the UK.

Also, there were a few other flaws I detected. For example, it doesn’t seem to give actual times of departure for trains. 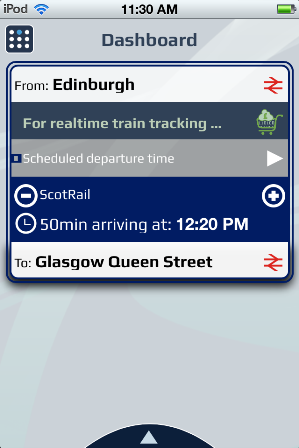 If you look at this image here, it gives the arrival time and the journey duration, which of course doesn’t require a rocket scientist to figure out the time of departure. But I can’t help think that users shouldn’t be required to look at the time of arrival and work back to establish when they need to be at the station. There does seem to be an option to obtain the scheduled departure time, but when I clicked, literally nothing happened.

I must also note that the app did crash on me a number of times throughout testing.

That all said, there is the makings of a really good app here if it can fine-tune things a little and remove these minor niggles.

For me at least, I would love to see a genuine all-encompassing app that covers all transport options in the UK. We’re edging closer towards that, and apps such as Commuter will certainly push us further in this direction.