Chinese ecommerce giant Alibaba has taken a note out of ebay’s book as it announced it is now showing visitors more details about “problem suppliers” on Alibaba.com, its B2B website for small businesses.

The site has not gone so far as to allow users to rate and comment on every transaction, as the US site does, but instead it has increased the scope of the customer complaints notifications that it posts on seller pages. They used to only cover fraud-related issues, but now the notifications include more routine complaints, such as product quality or delivery delays.

Alibaba explains that those committing fraudulent activities are being kicked off the site rather than just reported, as it looks to fine-tune its feedback and complaints channel to promote safer shopping and greater buyer awareness.

“Alibaba.com hopes the added disclosure can help buyers make more informed decisions when comparing suppliers”, it says in a post on its Alizila website. 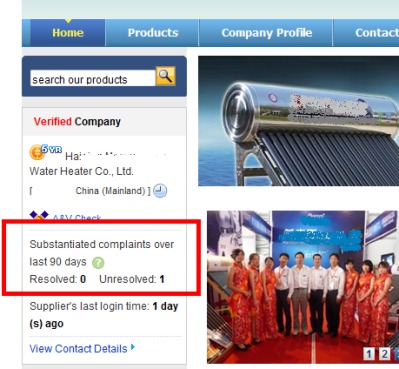 Alibaba.com still encourages its seller and buyers to resolve their disagreements themselves. However, in cases where the service’s staff find that a seller is at fault in a dispute, it will be included on their page as a warning for customers.

Each seller site shows the number of resolved and unresolved customer issues that have happened within the last 90 days, which at least encourages sellers to learn from any mistakes they make.

That number is listed on all seller pages — from storefronts, to promotion pages and specific product pages — but prospective customers must visit ‘company profile’, then ‘buyer interactions’ to find specific details of each customer complaint – including the nature of complaint and whether it has been resolved or not.

Proof of Alibaba’s thriving range of ecommerce sites — one of which is Alibaba.com — came when the company brought in $3.1 billion in sales during China’s version of Cyber Monday, held on November 11.

That figure is up 367 percent year-on-year and its Tmall.com B2C site took the bulk of sales ($2.1 billion) and C2C brand Taobao made $950 million during the 24-hour period. Alibaba says it played host to 10 million visitors alone in the first minute after midnight, and hit $40 million in gross merchandise value (GMV) within just 10 minutes.

The company is actively expanding outside of China and it has quietly attracted 2 million users outside of Greater China, primarily in Hong Kong (1.2 million) and Taiwan (500,000). It recently launched an ecommerce school in Thailand, its first outside of China.