A damning new study has suggested China holds threatening influence over Bitcoin – and perhaps even the ability to attack and ultimately destroy the entire Bitcoin network.

Academics from Princeton and Florida International Universities have explored how China “threatens the security, stability, and viability of Bitcoin” with its “political and economic control over domestic [cryptocurrency] activity […] [and] internet infrastructure.”

According to the paper, China has both “mature capabilities” and “strong motives” to perform a variety of attacks against Bitcoin. Even worse, it is already exerting its power over Bitcoin in a myriad of ways.

“As the value and economic utility of Bitcoin have grown, so has the incentive to attack it,” the researchers explain. “We singled out China for analysis because they are the most powerful potential adversary to Bitcoin, and we found that they have a variety of salient motives for attacking the system and a number of mature capabilities, both regulatory and technical, to carry out those attacks.”

The paper establishes its thesis by proving the Bitcoin mining ecosystem has become “heavily centralized.” Cryptocurrency miners have banded to such an extent that “over 80 percent of Bitcoin mining is performed by six mining pools,” with five of those managed directly by individuals or companies based in China.

The primary threat to Bitcoin’s infrastructure is the “51-percent attack,” which consists of mining pools teaming up to control a majority of the hash rate (Bitcoin’s overall processing power), allowing them to directly influence much of what happens on the Bitcoin network.

When you consider the combined effort of Chinese mining pools accounts for 74 percent of Bitcoin’s hash power, the situation becomes incredibly unsettling. 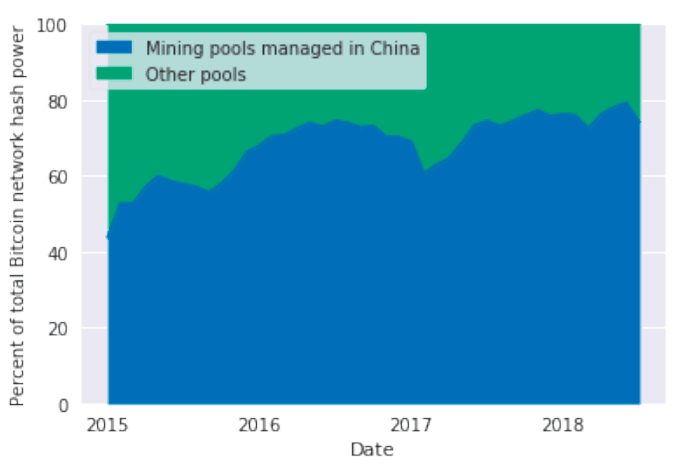 “Because managers are responsible for assigning mining jobs and propagating completed blocks, they control the inputs and outputs of their miners, allowing Chinese authorities indirect control over that hash power,” say the researchers. “This is a significant share of the global hash rate – more than controlled by any other single country – but the precise quantity is unknown.”

The fact that Chinese mining pools control so much of the Bitcoin ecosystem has direct consequences. In particular, having such centralized hash power exposes the Bitcoin network to rampant censorship and other potentially damaging attacks.

“Blocks found in China are already proximate to a majority share of hash power, so they can reach consensus more quickly than blocks found elsewhere,” reads the paper. “If the Chinese government assumed control of domestic hash power, this property would grant them an advantage in selecting blocks for the ledger, which is important for some types of attacks.”

China is slowing Bitcoin down

The paper has also revealed a certain unfairness to how mining rewards are being distributed – and how the current setup is making Bitcoin inefficient.

The alleged culprit is China’s Great Firewall. It purportedly distorts the playing field by adding latency for miners operating outside of its borders.

Apparently, Chinese mining pools can have priority for deciding which blocks to mine – especially empty blocks.

Even though they take the same time and power to mine, empty blocks do not contribute anything to the network, as mining them does not process any transactions. Still, they carry all the same rewards as full blocks.

The researchers conclude there must be some factor that applies to Chinese miners – but not other miners – that has incentivized the mining of empty blocks.

Again, when miners mine empty blocks, the entire network becomes less efficient. Not only are no transactions processed, but the overall network consumes costly resources in the process.

There are some advantages to mining empty blocks, but only for the individual who mines it. Mining empty blocks can move the miner up in the queue for receiving new (less empty) blocks to mine, increasing the likelihood of netting more mining rewards than others.

This effectively means China’s social policy has a direct impact on Bitcoin’s integrity.

China has the means to cripple Bitcoin

Below are the attacks geared towards destablizing the Bitcoin network as a whole. 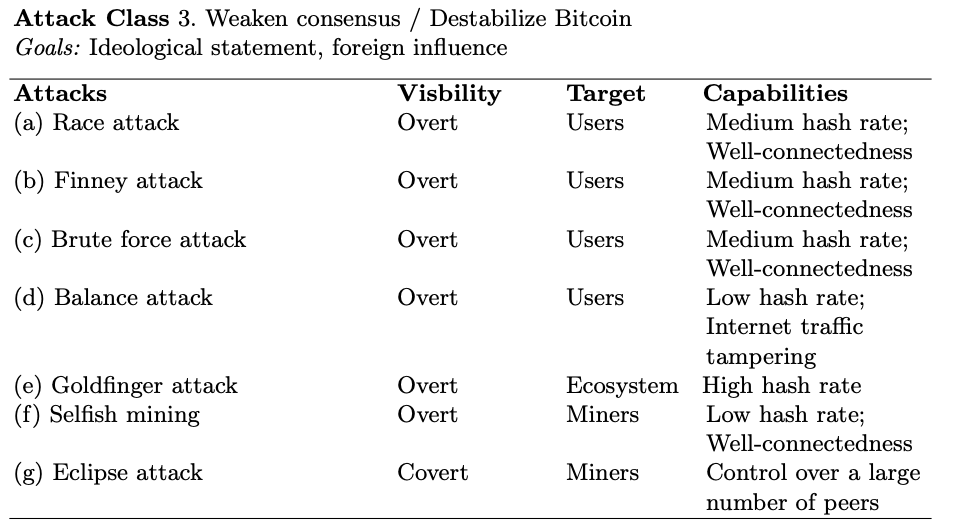 One of the scariest is a Goldfinger attack – in which mining pools apply their combined hash power to control (and ultimately kill) Bitcoin.

“[…] Bitcoin can only survive such an attack if the remainder of the miners are willing to pay a cost greater than what China is willing to pay to pull off the attack.” the paper explains. “Because other Bitcoin miners are loosely organized and China can bring massive resources to bear, the most likely scenario is a death spiral in which China can credibly threaten a Goldfinger attack and rational miners will be scared off, thus destroying Bitcoin.”

But why would China destroy Bitcoin?

All this doom-and-gloom leads to one question: why would China destroy Bitcoin?

“[China] may be motivated to weaken or destroy it to make an ideological statement; for example, demonstrating the futility of decentralized control paradigms,” the paper reads. “Virtually any violation of Bitcoin’s security suffices to achieve this goal as long as it is highly visible.”

Even more worrisome, the researchers believe China could actually weaponize its control over Bitcoin in order destabilize foreign economies.

“To exert influence in a foreign country where Bitcoin is in use, China may aim to weaken or even totally destroy Bitcoin. This could be done by targeting specific users or miners for attack or by generally weakening consensus to increase volatility to a breaking point.”

The paper has yet go through proper peer reviews – so take the conclusions with a grain of salt.